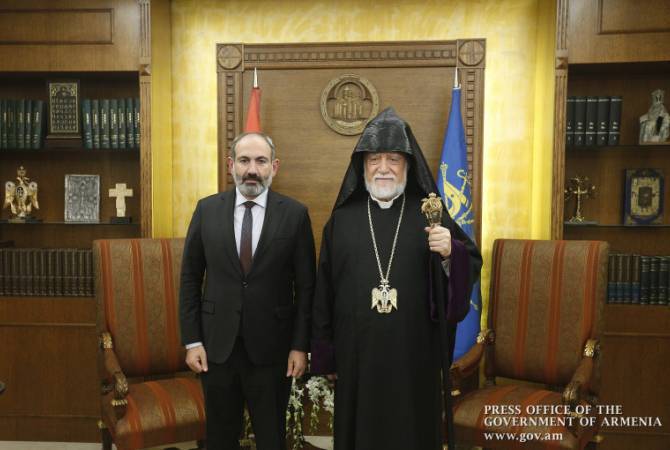 ‘’Your Excellency Mr. Prime Minister,
With Christian love and patriarchal blessing we convey our greetings from the Cathedral of the Catholicosate of the Great House of Cilicia, Antelias. We congratulate you on the occasion of the parliamentary elections and your appointment as Prime Minister of the Republic of Armenia and formation of the new Government.

Indeed, at a crucial period in the history of the Armenian people and Armenia, you are again called to assume the difficult and responsible post of Prime Minister. It's a position that is not just a position or honor, but is a mission to build the homeland in its essence and purpose. Today, as you know, our motherland is surrounded with serious trepidation, caused by both domestic and extrnal factors. The foundations of the statehood are endangered. Disappointment and uncertainty have become a dominant part of the lives of the people of Armenia and Artsakh. Therefore, the people expect you to undertake the mission of restoring and revitalizing the homeland with the highest level of responsibility and commitment. Based on this expectation and prospect, we want to draw your attention to the following points:

Mr. Prime Minister, we expect you to take seriously our concerns and thoughts, which were briefly presented to you, so that we can lead our homeland to a brighter future with collective and consistent efforts, in a prudent and responsible spirit.

We prayerfully appeal to the Lord for the Republic of Armenia and Artsakh to be unshakable and safe, and we ask Him to grant you wisdom and strength in fulfilling your difficult mission.

11:29, 05.19.2022
3070 views U.S. recognizes role of population of Nagorno-Karabakh in deciding its future–Ambassador Tracy’s interview to ARMENPRESS