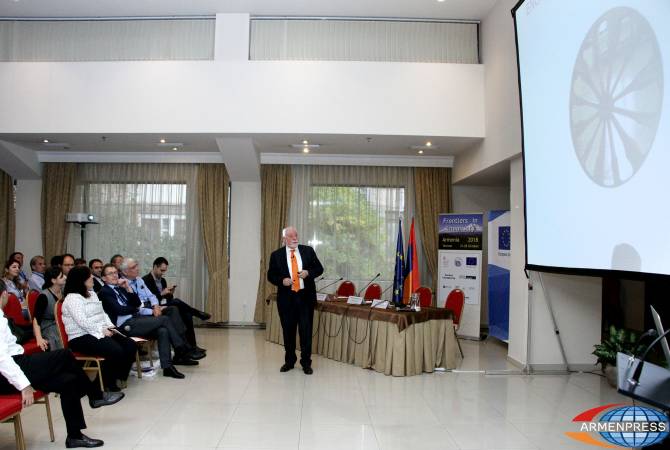 
YEREVAN, OCTOBER 22, ARMENPRESS. Groningen University of the Netherlands in partnership with the Yerevan State University and with the support of the European Union Delegation in Armenia organized a massive scientific international conference – Frontiers in Chemistry: Armenia (ArmChemFront2018) on October 22, reports Armenpress.

World-renowned speakers, including 2 Nobel Prize winners and the EU’s Horizon2020 participants have been invited to Armenia. Apart from the invited top speakers, more than 100 scientists from all over the world, including Armenia, were present at the conference. The main goal of the symposium is to provide Armenian scientists, especially the younger generation, with the opportunity to get acquainted with the best practices in the field using innovative methods and quality techniques in their work. The core message of the conference is the need to reenergize chemical research in the Republic of Armenia tailored to the specific requirements and conditions of the country and in line with the scientific achievements of the world.

The conference kicked off with the welcoming speech by Syuzanna Harutyunyan, Professor of Organic Chemistry at the University of Groningen and the main Coordinator of ArmChemFront 2018. She stated that the main goals of the conference focus on empowering Armenian scientists. “International conferences play an important role in scientific research, since they serve as a unique platform for the researchers to present their scientific achievements and results, as well as to expand their network of cooperation”, she said.

During the opening ceremony EU Ambassador Piotr Świtalski said Armenia needs more participation in international research and innovation programs. “Science, research and development (R&D), technology and innovation are key for improving competitiveness, economic growth and for creating jobs. European Union is committed to stronger Armenia and ready to bring people together around the practice and enjoyment of learning and innovating to showcase the link between educations, learning and employability as well as finding solutions in a community”, he said.

Deputy minister of education and science Hovhannes Hovhannisyan also delivered welcoming remarks at the event: “The economic difficulties accompanying the historical course of events focused on the restoration of the independence at the end of the 20th century created certain natural obstacles for the preservation and further development of scientific and industrial capacities of the sphere. Nowadays, under the new realities in Armenia, we do need modern, up-to-date solutions in line with the current requirements in order to restore and upgrade the formerly existing chemistry capacities”, he said.

Other officials also delivered remarks during the event.

At the end of the conference “The Best Talent” scholarship award will take place on October 25. The international panel of scientists will select the brightest Armenian talent. Within the framework of the scholarship the selected student will get a chance to have a 3-month internship at one of the top chemistry research groups in the world.

The University of Groningen organized the first International Chemistry Conference ArmChemFront in Yerevan in 2013.