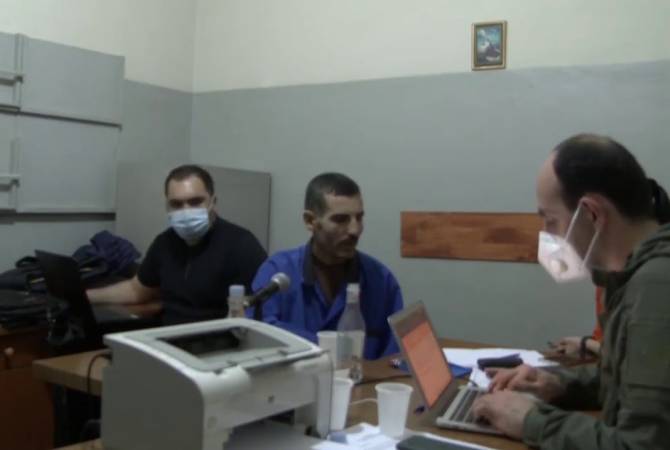 
YEREVAN, NOVEMBER 1, ARMENPRESS. The Armenian Committee of Investigations released the video from the questioning of Mihirab Muhammad Al Shayir, the Syrian militant who was recruited as a mercenary and sent to Azerbaijan to fight against Artsakh.

“A man named Abu Hussein 23 told me that we must go to an area near the town of Kilis, where the command of various rebel groups is located. Two days later we were taken to another location, where the chief commander of the Suleyman Shah Brigade, a man with the nom de guerre Abu Hamsha was located,” Al Shayir said.

He said that 250 rebels were chosen and divided into groups.

He said they reached Kilis, a town on the border between Syria and Turkey, on October 17, 2020. They were then ordered to cross into Turkey on foot.

“At the Turkish border checkpoint the border guards didn’t say anything, they didn’t ask us anything. They definitely knew that they had to let us through. The commander by the name of Abu Hamsha led us through the border. Then we came across a Turkish police patrol cruisers, and again they didn’t say anything. We were taken to a civilian airport on buses. Around an hour later the plane landed in another Turkish airport,” he said.

There, they were met by more than 50 Turkish soldiers, who gave them Azeri military fatigues. On October 18, their airplane bearing the Azeri flag landed in Azerbaijan and the fighters were taken to a military facility where again Turkish military officers, mostly gunners, were stationed.

“We were told that we would fight against Armenians. In the morning, with around 200 others we were driven for nearly 100 kilometers. We were divided into groups and a commander was appointed. We were ordered to capture the nearby Armenian village and kill everywhere there. I was wounded during the attack, I asked for help but my troops abandoned me,” he said, adding that commander Abu Hamsha had told them to take drugs if they were afraid. The fighters were promised a 2000-dollar monthly payment.

On October 31, the Armenian authorities placed Al Shayir under arrest on charges of international terrorism, gross violations of international humanitarian law norm during armed conflicts (murder, attacking civilians, indiscriminate attacks), and his participation in a military conflict as a mercenary.