2022 STARMUS festival in Armenia to gather over 60 scientists, engineers, artists from all over the world | ARMENPRESS Armenian News Agency

2022 STARMUS festival in Armenia to gather over 60 scientists, engineers, artists from all over the world 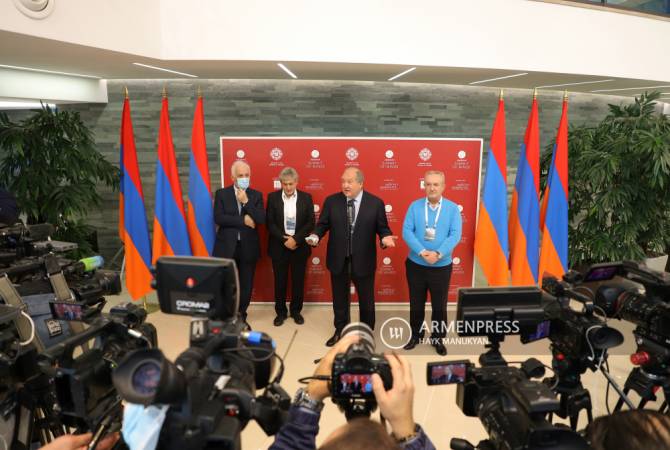 
YEREVAN, OCTOBER 23, ARMENPRESS. The sixth STARMUS festival, which is going to be held in Armenia next year in September, will gather more than 60 scientists, engineers and artists from all over the world.

The list of participants will include Nobel Prize winners, American-Armenian physician, engineer, first astronaut of Armenian descent James Bagian, Nest Labs founder, American innovator of Lebanese descent Tony Fadell and others, the founding director of STARMUS festival Garik Israelian told reporters in the Armenian town of Dilijan on the sidelines of the Armenian Summit of Minds.

“50 Years On Mars”, this is the slogan of the 6th STARMUS festival, dedicated to Mars.

“I believe that in the next 10-20 years Mars will be the most discussed topic. The topic doesn’t suppose that the whole festival will be dedicated to astronomy. This will comprise 20% in the overall discussions, the rest part will be devoted to biotechnologies, physics, high technologies, etc”, Garik Israelian said.

He noted that science is rapidly developing within the course of the years, but in line with this the big gap between the society and science is increasing. There is a task to make science closer to society, make it more available and attract also the youth. According to Israelian, here the STARMUS plays a vital role which aims at creating a link between society and science.

Highlighting the holding of the festival in Armenia next year, President Armen Sarkissian said that thousands of participants will arrive in Armenia to attend this big day of science, art and music.

“This is the best way of encouraging our youth in order for them to understand that their future, the future of their families and country will be connected with new technologies, ideas and science. Our country has the biggest wealth – talented people, who should be supported in order to develop. Here the best way is to educate the young generation, encourage and present them”, the Armenian President said.

In his turn Armenia’s Minister of Education, Science, Culture and Sport Vahram Dumanyan said that the holding of this festival in Armenia in the post-war and COVID-19 period is of great importance. He said that during this period the Armenian society raises numerous issues relating to security. According to him, the best guarantee to security is to have a developed science, education and culture and be the leader in that field.

“There will be a very interesting program during the festival, which will be available for everyone, including the school-children, students, for all those who wish to participate”, he said.

Minister of High Technological Industry Vahagn Khachaturian said that Garik Israelian’s step is an inspiring and best example for all those who want to act in Armenia. “Today the field of working in Armenia is open. As a government, we are open to any kind of cooperation and joint programs”, the minister said.

The sixth STARMUS festival will be held under the high patronage of the President of Armenia, Dr. Armen Sarkissian, on September 5-10, 2022. The President has invited Starmus to Armenia during his invited speech in 2019 at the opening ceremony of Starmus in Zurich.

21:02, 12.01.2021
Viewed 1990 times Lavrov speaks about Russia's role in finding solutions to issues of dispute between Armenia and Azerbaijan