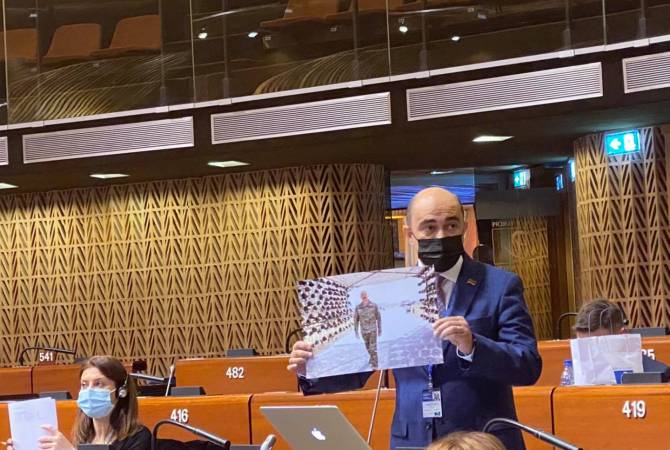 
YEREVAN, APRIL 19, ARMENPRESS. Member of the Armenian delegation to the PACE, head of the parliamentary faction of ''Bright Armenia'' Party Edmon Marukyan said that by opening a ''trophy park'' in Baku, Ilham Aliyev equalized himself with dictators like Adolf Hitler and Saddam Hussein used to be, ARMENPRESS reports Marukyan said in his speech at the PACE.

‘’On April 12, 2021 Azerbaijani state TV channel dedicated an hour-long reportage to the museum opened in Baku about the 44-day war in Nagorno Karabakh. In this terrorist-style exhibition Azerbaijani president Ilham Aliyev dressed in military uniform was proudly touring and showing the Armenian military equipment and the real-size wax mannequins mocking the Armenian soldiers. The central part of the so-called ''trophy park'' was a long path filled with helmets of Armenian servicemen who had been killed or taken hostage'', Marukyan said, emphasizing that this has taken place in a country that is a member to the Council of Europe.

''Let me remind that Azerbaijan is a country that continues to illegally keep over 200 Armenian POWs and civilian hostages’', Marukyan said, showing a number of photos taken from the ‘'trophy park''. He added that all those photos demonstrate the racial hatred in Azerbaijan against Armenia and Armenians.

''There are long queues to visit this park, which is disgusting and simply unacceptable. With this act Aliyev joint such dictators as Hitler and Saddam Hussein used to be’', Marukyan said, bringing the example of a similar park in Iraq constructed by Saddam Hussein using the helmets if over 5000 Iranian soldiers, which Hussein called ''Victory Arch''. ''I see also another similarity between the two dictators – like Hussein, Aliyev does not want to return war prisoners'', Marukyan said, adding that the Baku park clearly shows the aggressive nature of the Azerbaijani authorities and their real face.

''They promote racial hatred and think that the demonstration of ill-treatment and torture to the future generation and the entire world is a normal phenomenon. History has proved that if timely measures are not taken to stop dictators, it stops being local and spreads throughout the world. I urge you to pay attention to these developments and hope that necessary and immediate measures will be taken to condemn the activities of Azerbaijan. The so-called ''trophy park'' must be closed'', Edmon Marukyan concluded.