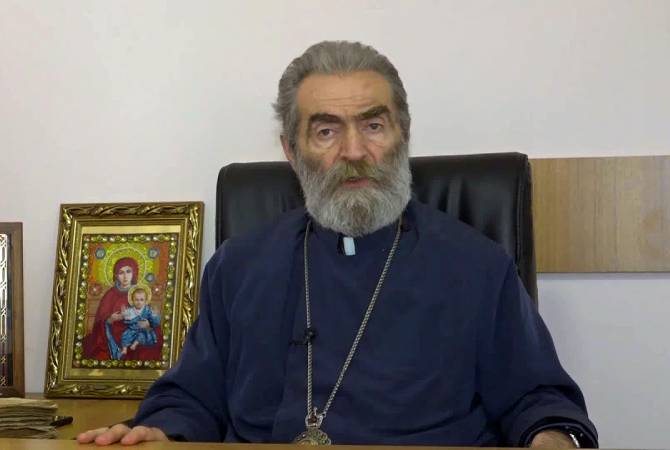 
YEREVAN, OCTOBER 24, ARMENPRESS. Primate of Artsakh Diocese, Archbishop Pargev Martirosyan has applied to the leaders of the OSCE Minsk Group Co-Chairing countries, requesting to stop the ongoing war unleashed by Azerbaijan with the support of Turkey against Artsakh.

“It’s almost a month a brutal war is taking place in Artsakh, and Turkey with its entire force has been involved in the war and is supporting Azerbaijan. It has sent nearly 4000 international terrorists and now as well has sent 1200 special servicemen which are forest specialists. I apply to the leaders of the OSCE Minsk Group Co-Chair countries – Mr. Macron, Mr. Trump and Mr. Putin, so that they raise their voice and stop this new genocide. 100 years later Turkey is trying to commit the second genocide here, like Azerbaijan tried to commit a genocide against Armenians in Sumgait and Baku in 1989-1990. Mr. Erdogan has a big dream to create a neo-Ottoman empire, and Armenia and Artsakh are on that crossroad”, Archbishop Pargev Martirosyan said.

He said Turkey wants to clean Armenians from their territory.

“I also apply to all leaders of the world, religious leaders, political scientists, people of good will to raise their decisive voice and stop this bloodshed. A nation is being killed, civilians, elderly people, children and women are being killed. I hope that this time as well Moscow, like it managed to stop the war in the 90s and in 2016, will stop this war in the territory of Artsakh”, he said.