Most of my squad were foreigners, Azeri POW says in Artsakh | ARMENPRESS Armenian News Agency

Most of my squad were foreigners, Azeri POW says in Artsakh 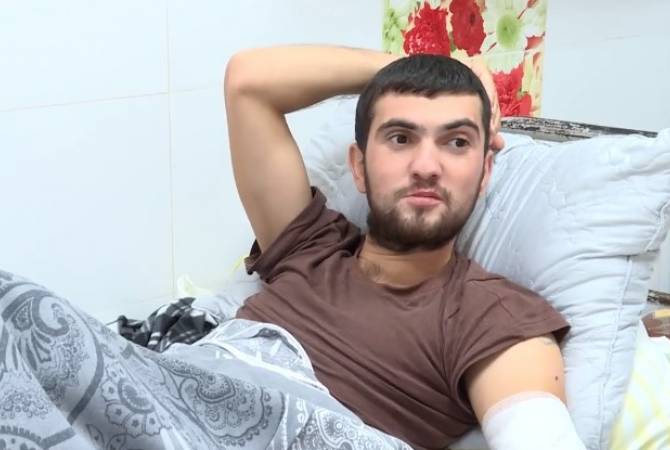 
YEREVAN, OCTOBER 24, ARMENPRESS. An Azerbaijani prisoner of war detained by the Artsakh military has said that most of the troops in his squad were not Azerbaijanis.

Nuradin Yolchiev Bakhtiyaroghu, an Azeri soldier from the village of Marzili of Yevlakh region, is being treated for his injuries at a hospital in Artsakh for already 20 days after being detained as a prisoner of war.

Bakhtiyaroghu said he and his squad were dispatched by the Azeri command to capture the village of Talish, where heavy battles took place.

“I was wounded during the firefight, many others from our troops were also wounded, I couldn’t feel my leg and arm. I asked for help from my troops and commanders, but they didn’t evacuate me from the battlefield. I virtually didn’t know any of them, most of the troops from my squad were not ethnic Azerbaijanis, they were speaking in another language,” Bakhtiyaroghu said.

The POW said he survived one day in a gorge, and then the Artsakh Defense Army troops discovered him and evacuated him to their position, from where he was hospitalized.

“I wasn’t pressured, I was treated well. It’s nearly 20 days that I am hospitalized, I had pains during the first days, but now thanks to the doctors I am getting better. The doctors and the entire staff are treating me well, the food is also good,” he said.

Another Azeri POW – Emin Bakhshalin Jahir Oghlu, detained by Artsakh, had earlier said that military experts from the Turkish Armed Forces have arrived in Azerbaijan and are commanding the military attacks on Artsakh.

Intelligence agencies from a number of countries had earlier confirmed that Turkey has recruited militant-mercenaries from international terrorist organizations from Syria and other countries and sent them to Azerbaijan to fight against Artsakh.