BREAKING. We hope Armenians will be able to defend against what Azerbaijanis are doing – Pompeo | ARMENPRESS Armenian News Agency

BREAKING. We hope Armenians will be able to defend against what Azerbaijanis are doing – Pompeo 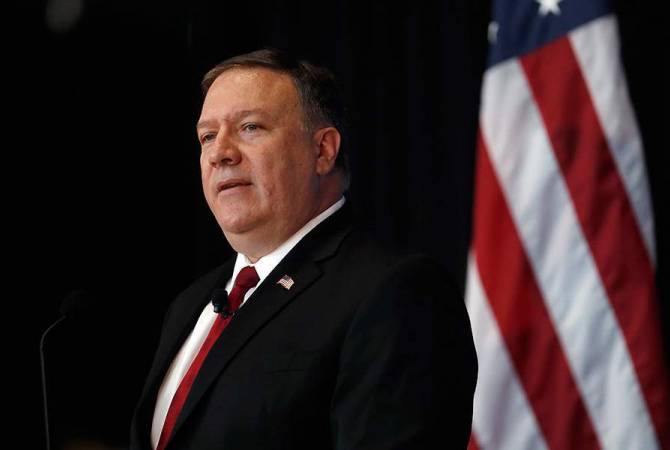 
YEREVAN, OCTOBER 15, ARMENPRESS. U.S. Secretary of State Mike Pompeo hoped that Armenians will be able to defend against what Azerbaijanis are doing, ARMENPRESS reports Pompeo said in an interview, assessing Turkey’s intervention in the developments in Nagorno Karabakh as dangerous.

‘’ It is dangerous.  We now have the Turks, who have stepped in and provided resources to Azerbaijan, increasing the risk, increasing the firepower that’s taking place in this historic fight over this place called Nagorno-Karabakh, a small territory with about 150,000 people’’, Mike Pompeo said.

The Secretary of State added that it’s a longstanding conflict which has to be solved through negotiations and discussions.

‘’ it’s a longstanding conflict.  The resolution of that conflict ought to be done through negotiation and peaceful discussions, not through armed conflict, and certainly not with third party countries coming in to lend their firepower to what is already a powder keg of a situation.  We – we’re hopeful that the Armenians will be able to defend against what the Azerbaijanis are doing, and that they will all, before that takes place, get the ceasefire right, and then sit down at the table and try and sort through this – that is – what is a truly historic and complicated problem set’’, the U.S. Secretary of State said.

Azerbaijan unleashed aggression against Artsakh on September 27. It is directly supported by Turkey, which has provided its F-16 fighter jets and Syrian terrorists to Azerbaijan to fight against Armenians.

On October 10 the Armenian and Azerbaijani FMs reached an agreement on humanitarian ceasefire in Moscow under the mediation of Russian FM Sergey Lavrov. However, Azerbaijan started to grossly violate the agreement, including bombing of civilian settlements, just before the agreement would come into effect.

Prime Minister of Armenia Nikol Pashinyan has announced that Azerbaijan will never stop military operations as long as Turkey does not change its expansionist policy in South Caucasus.