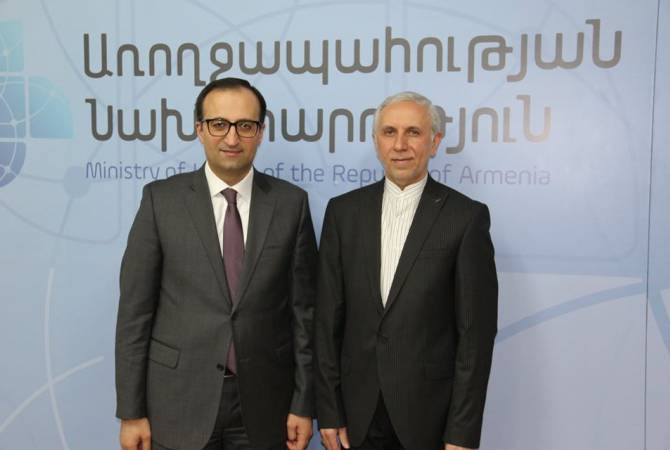 The officials discussed the situation caused by the novel coronavirus, as well as the ongoing actions to prevent the spread of the virus in both countries.

The Armenian minister congratulated Iranian Ambassador on assuming office and then introduced the actions being taken in Armenia.

The Ambassador thanked for the meeting and introduced Iran’s experience in the past two weeks for fighting against the novel coronavirus. The Ambassador said a great medical team has been formed in Iran aimed at preventing the spread of the virus, as well as there is a 24-hour hotline.

The Ambassador presented recent data according to which 7280 Iranian citizens applied to hospitals after the entry of Covid-19 into the country, of which 4312 were tested. As of the daytime of March 2, 1501 cases of coronavius were confirmed in Iran, 291 people recovered. 66 death cases were reported.

“Our country’s experience shows that we need to further enhance the preventive actions, rather than the treatment, and this is also important for Armenia until the problem hasn’t gone further”, the Ambassador of Iran said.

The sides also discussed the spread of fake news on coronavirus and highlighted the importance of providing accurate information.

The Armenian minister and the Iranian Ambassador agreed to keep direct contact with Iran’s health minister.

“I hope everything will be solved soon and the life will continue in its normal course”, the minister said.

He expressed readiness to help Iran from professional perspective, and the Iranian Ambassador in turn expressed good health to the patient infected with Covid-19 in Armenia.