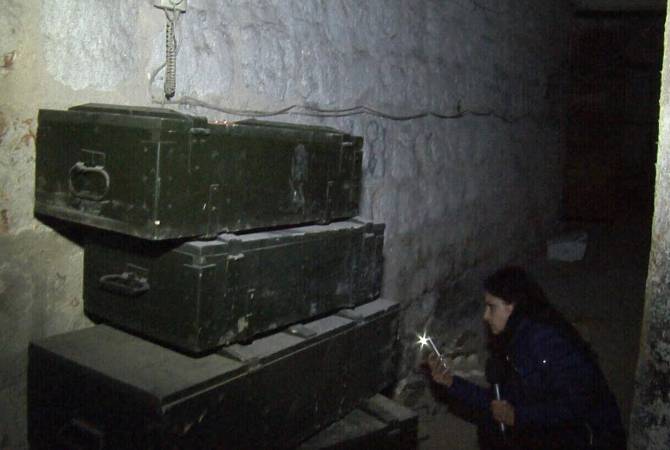 
YEREVAN, AUGUST 25, ARMENPRESS. Dilyana Gaytandzhieva, a Bulgarian journalist, who published a scandalous report on Azerbaijani state-run airline’s supply of weapons to different heated parts of the world under the cover of diplomatic flights, has been dismissed from her post, reports Armenpress.

“Today after I was interrogated by the Bulgarian National Security Agency about the secret documents, which were leaked to me about the weapons supplies for terrorists in Syria, I was fired by Trud Daily, just few days before going back to Syria to continue my job”, she writes on Facebook, with her investigation attached, but at the same she doubts that the source can be removed from Trud Dialy.

A scandalous investigation has been published in the Bulgarian newspaper Trud on July 2 which reveals the Azerbaijani state circles’ direct engagement in supplying weapons to Islamic terrorist groups at different parts of the world.

Dilyana Gaytandzhieva’s investigative article mainly focuses on the illegal and large-scale export and sale of arms to Syria, Iraq, Afghanistan, Pakistan and Congo by Silk Way Airlines (an Azerbaijani state-run company) under the cover of diplomatic flights.

Documents implicating Silk Way Airlines in arms supplies were sent to the author of the article by an anonymous twitter account – Anonymous Bulgaria. Dilyana Gaytandzhieva says over the past three years the state aircrafts of Azerbaijan carried on-board tens of tons of heavy weapons and ammunition headed to terrorists under the cover of diplomatic flights. The author of the investigation notes that some of the weapons that Azerbaijan carries on diplomatic flights were used by its military in Nagorno Karabakh.

ARMENPRESS news agency as well revealed scandalous facts about the activity of Azerbaijani embassy in Bulgaria while examining the documents that were accessible on the internet. Pressures were recorded on other citizens who carry out their professional activity in Bulgaria. The Azerbaijani ambassador even urged the Union of Journalists of Bulgaria to frozen journalist Tsvetana Paskaleva’s membership, as well as to hinder the events of AGBU Bulgaria branch that carries out legal activity in that country. Weeks ago it became known that Chairman of AGBU Bulgaria’s youth union Hayk Karapetyan had to leave the post of the member of the Plovdiv National and Integration Council under still undisclosed circumstances. The reason, according to ARMENPRESS information, has been the interference of the Azerbaijani side and the fact that Bulgaria’s state bodies succumbed to pressures instead of protecting the rights of a citizen of the country.