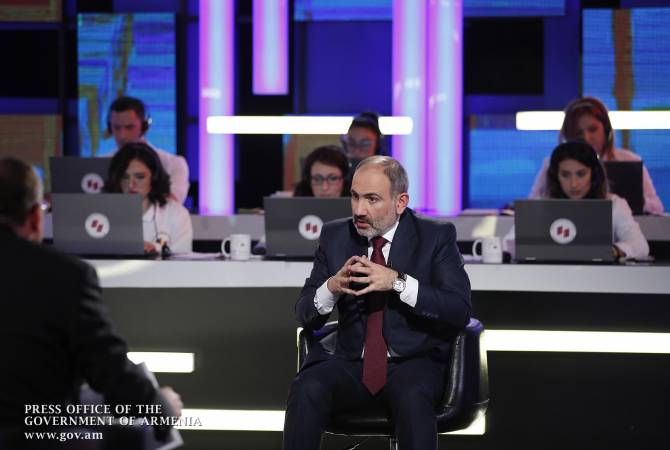 
YEREVAN, NOVEMBER 29, ARMENPRESS. Armenian Prime Minister Nikol Pashinyan assures that the efficiency of spending every money of the Hayastan All-Armenian Fund will be under strong control.

During the annual telethon of the Fund the PM assured that any abuse in the Fund will be ruled out. He said in order to make the activity of the Fund more effective, it is necessary to refuse from the logic of major donations provided by limited number of people and pass to the logic of small donations, but with a large number of people. In a live broadcast the PM challenged Serj Tankian, Kim Kardashian and Alexis Ohanian.

“Before coming here I studied certain statistics. Since the foundation of the Hayastan All Armenian Fund, 635 kilometers of road have been constructed, apartments have been built for 970 families, 585 kilometers of water pipeline have been constructed, 364 schools have been built, reconstructed or renovated, 75 medical facilities have been built or renovated, 115 greenhouses, 173 educational, scientific and cultural programs have been implemented thanks to its funds. As a summary of all of this I want to bow my head before all those people who have donated to the Hayastan All-Armenian Fund at least once. Dear compatriots, I really bow my head before you and highly value your contribution which really helped Armenia at very difficult moments. But I hope that you remember that I first of all have been a journalist, than an opposition lawmaker who likes asking questions. And I want to disclose a secret, I didn’t stop asking questions, of course, now the questions are in a narrower format, perhaps are not always public. And I asked myself – how much has the Fund raised within these 27 years since its foundation? It turned out that that money is about 370 million USD. OK, very good. There have also been non-monetary donations. Let’s suppose that these non-monetary donations also comprised nearly 370 million USD. Let’s suppose that overall, although that would be somehow exaggerated, but overall 1 billion 250 million USD was provided in aid to Armenia by the Fund and various charitable programs outside the Fund. And the question is the following – have the 10 million Armenians donated 1.5 billion USD within 27 years? And this 1.5 billion USD is exaggerated”, the PM said.

Pashinyan informed that he recently talked to a very famous representative of the Diaspora who told him that as a result of this whole process demystification of Armenians has taken place because Armenians around the world are known as a very powerful force. “In any case, we have such a perception and image. He told me that let’s look at the viewpoint of the adversaries: they say let’s see what assistance Armenians provided to Armenia? And it turns out – 13 million USD annually. In order for you to understand what is that annual 13 million USD, I want to note that in 2019 the government of Armenia has already collected additional 62 billion drams not envisaged by the budget, which is nearly 132 million USD. But we need to understand the reason behind this situation”, Nikol Pashinyan said.

The PM said he sees several components here. “First of all, the main funds of the Hayastan All-Armenian Fund have been provided by the representatives of the Diaspora and famous Armenian figures, the wealthy people, etc. But here there is a problem. For 27 years we expected money from the same people or the same circle, and those people gave that money, but one, two, three, four, five, twenty-seven. This is a problem. Of course, there has been a certain issue of trust. But I don’t want to talk about the past, I want to talk about today and the future. What do I think? What do I propose? What is my vision? I return to the formula I was talking before the revolution from the perspective of financing the political activity. I was stating that for instance if we need 1000 AMD, we should not find a person who will give us that money, but we need to find 1000 persons which will provide 1 AMD each. And also by taking into account this fact I also stated that we need to make serious changes here. I was talking about the idea of a pan-Armenian budget. And what is that budget? That is that we need to pass from the logic of major, but with limited number of people donations to the logic of small, but with large number of people donations. How many Armenians live today around the world? They are estimated to be 10 million. Ok, let’s suppose that this 10 million Armenians do not reflect the reality by 100%. Some say they are 7-10 million, I will take 5 million and will say the following: if 5 million Armenians donate 200 USD annually or 20 USD monthly to the Fund, we will have 1 billion 250 million USD annually. And what we propose for this? When we were voicing questions regarding the activity of the Fund, we were told whether it’s right for us to go deeper to see what is happening. We said yes, because this is the way of raising the trust towards the Fund. And today I want to state that the efficiency of spending every money of the Fund will be under double, triple control, and we will rule out any abuse in the Fund”, he said.

He informed that he entered the website of the Fund (himnadram.org) and via online donations made so that every month 10.000 AMD will be transferred to the Fund from his card.

“And now if 5 million Armenians do the same action what I did, we will have more than 1 billion USD annually, rather than 13 million USD. We also should engage the people in this process. I challenge three Armenians – the first one is Serj Tankian. Dear Serj, you have a challenge to enter himnadram.org and do so that every month 21 USD will be transferred to the Fund from your card. The second one is Kim Kardashian. Dear Kim, I don’t know whether you hear me now or not, but I hope you will get informed. Please, visit himnadram.org and do so that every month 22 USD will be transferred from your card to the Hayastan All-Armenian Fund. And the third one is Alexis Ohanian. Dear Alexis, I don’t know whether you now follow the live broadcast or not, but I am convinced that you will get this message. I send a challenge to you to visit himnadram.org and make so that every month 23 USD will be transferred to the Hayastan All Armenian Fund from your card. But it’s very important that you do this process publicly and send in your turn a challenge to three other Armenians you know. And in general, all those who will take this step, invite three more Armenians to do the same. And if we manage to spread this within 5 million Armenians, we will have a pan-Armenian budget which will definitely serve for the strengthening of Armenia, Artsakh and also the Diaspora. It’s very important for us to make this process engaging. The Armenian wealthy people will again continue the donations, I am sure”, PM Nikol Pashinyan said.