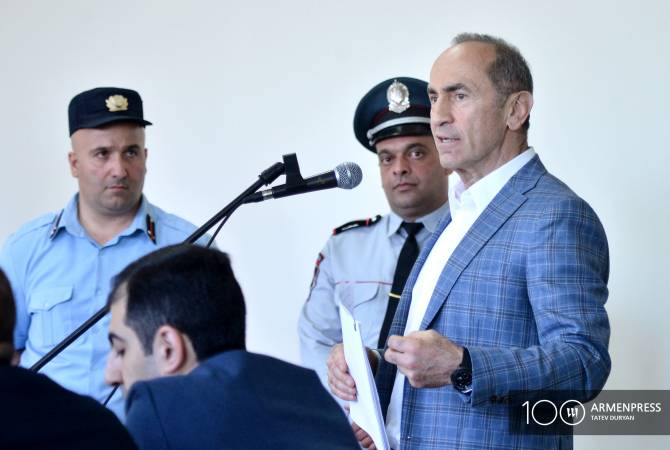 
YEREVAN, MAY 16, ARMENPRESS. Ex-President of Armenia Robert Kocharyan told a Yerevan court today during the ongoing 2008 post-election unrest trial that during that period authorities had video evidence that the protesters were armed and violent.

“The investigative body was initially categorically denying about the existence of the materials,” he told the court.

According to him, Hakobyan told him that the protesters were using weapons, had hand grenades and were opening gunfire.

“After the events, when they were criticizing in the press that these things did not happen, I demanded and Hakobyan personally brought and showed the video material and several other episodes. Today these materials aren’t anywhere, and I don’t know where they are. The National Security Service had rather interesting materials, how a hand grenade is exploding, resulting in the death of a police captain, this doesn’t exist today,” Kocharyan said. According to him, an entire criminal case comprising three volumes, that was submitted to the Special Investigative Service on March 2, is not there today, it hasn’t been attached.

Sahakyan and Ghukasyan are seeking the release of Kocharyan from jail and have petitioned personal guarantees to the Yerevan court.

Arkady Ghukasyan was President of Artsakh from 1997 to 2007.

The judge had said the petition requires them both to be personally present in court.

Robert Kocharyan, who also served as President of Artsakh from 1994 to 1997, is facing coup-related charges in the 2008 post-election unrest case, known as the March 1 case.