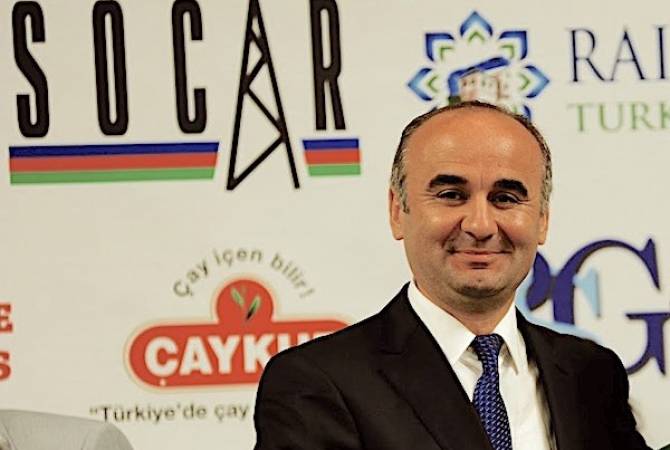 
YEREVAN, SEPTEMBER 1, ARMENPRESS. The curious story behind the arrest of a pro-Azerbaijani and pro-Turkish lobbyist who was detained in Yerevan by law enforcement agencies gets more and more bizarre after scrutinizing the available information and putting the pieces together from the man’s past.

Kevin (Kemal) Oksuz, the Turkish-born American citizen wanted by the United States who was arrested in Yerevan on August 29, is nowhere near to be considered a minor lobbyist.

It appears the man has, or at least at some point had, close ties with the government of Azerbaijan.

As previously reported, Oksuz is also a part of the Gulen movement in North America, being heavily involved in its operations. It is noteworthy that currently the state of Azerbaijan has the same position on the Gulen movement as Turkey – the Gulen movement is outlawed.  Azerbaijan’s attitude for Oksuz at this moment is unclear, taking into account the fact that Baku and Ankara carry out almost identical policies. It is moreover unclear to whom Oksuz has remained faithful to – Gulen movement, or Azerbaijan.

As reported earlier, Oksuz was the center of a US Congressional inquiry into a controversial trip organized by his US-based nonprofit for American lawmakers to Azerbaijan. The Congressional inquiry revealed that Azerbaijan’s state-owned SOCAR oil company secretly funded the trip and spent hundreds of thousands of dollars, including on lavish gifts for the American politicians.

Oksuz chaired the Assembly of Friends of Azerbaijan (AFAZ), a Houston-based tax-exempt nonprofit, an influential organization closely tied with Azerbaijani authorities. He later moved the nonprofit to Washington, according to reports.

“AFAZ may have been established in 2012 but took its first official actions in April 2013, approximately one month prior to the Convention.The organization was created in Houston, Texas by the leadership of SOCAR and has since moved to Washington, D.C.Its CEO and President was Kemal Oksuz. At the time, Kemal Oksuz was also the President of TCAE”, the Office of Congressional Ethics of the US House of Representatives Report Review No. 15-9180 reads. TCAE is the Turquois Council of Americans and Eurasians.

But the most interesting part of the report is about Kemal Oksuz’s relationship with SOCAR.

Funds transfer request from SOCAR to International Bank of Azerbaijan

“For example, it appears that following the Convention in September 2013, Mr. Oksuz worked with several Turkic nonprofits to send letters and video messages from Members of Congress to the President of Azerbaijan.A consultant for SOCAR noted that the “SOCAR chair, parliament speaker, and Ambassador value Kemal’s opinion,” the report said.  The report also notes that it is SOCAR that selected Oksuz to be president of AFAZ.

According to a 2014 article of the Houston Chronicle, AFAZ “operates as a U.S.-based public relations arm of SOCAR,” which is in turn wholly controlled by the Azerbaijani government. The nonprofit lists Rauf Mammadov, director of SOCAR America, as its treasurer.

Back in early 2013, AFAZ worked with the Embassy of Azerbaijan to help organize an event on Capitol Hill in Washington commemorating the anniversary of the so-called Khojaly massacre, according to The Sunlight Foundation.

Speaking to The Sunlight Foundation via email in a 2014 interview, Oksuz denied having ties with SOCAR, and sent the following letter:

Oksuz's email to the newspaper

Oksuz denied that AFAZ is tied to SOCAR, but the Congressional report clearly leaves no doubt that it operated through Azerbaijani oil dollars and that Oksuz is a personal acquaintance of many top level Azerbaijani government officials, perhaps even President Ilham Aliyev himself.

Subsequently Kemal Oksuz was charged by the US for fraud over falsifying documents and hiding the true source of funding for the trip which he organized for the American lawmakers. It is unclear how and when he left the US and where he was located at the time of being declared wanted.

But on top of all this, it appears that Kemal Oksuz is also involved in the Azerbaijani Laundromat case – the highly publicized corruption scandal which was uncovered by the OCCRP - Organized Crime and Corruption Reporting Project. The Azerbaijani Laundromat is a complex money-laundering operation and slush fund that handled $2.9 billion over a two-year period through four shell companies registered in the UK. The Azeri state-sanctioned bribery scheme was used to pay off European lawmakers.  But in a follow-up report about the Azerbaijani Laundromat case, the OCCRP reported in a May, 2018 article titled Baku’s Man in America that another recipient of the Laundromat money “was an influential American oil and gas consultant of Azerbaijani origin who worked to influence US policy in his native country’s favor”.  And this man himself is tied with the controversial trip of US lawmakers organized by Oksuz.

“Adil Baguirov, a business owner based in Dayton, Ohio and a vocal member of the Azerbaijani Diaspora, received the $253,150 transfer just months after a non-profit organization he runs, the Houston-based US Azeris Network, helped host a conference in Baku, Azerbaijan’s capital, that was attended by 10 members of Congress. The junket was widely criticized, and investigated by the House Ethics Committee, for being secretly funded by Azerbaijan’s state oil company,” the OCCRP said.

“Baguirov’s Washington lobbying in the interests of Azerbaijan goes far beyond the 2013 conference. He has also helped organize other US-Azeri conferences in Washington, repeatedly testified before the House in favor of US military aid to Azerbaijan, served as the coordinator of the Congressional Azerbaijan Caucus, and worked prominently in a Houston-based company that claims to have organized a trip by the country’s president, Ilham Aliyev, to the White House.

Baguirov outside the Armenian Embassy in Washington D.C.

Baguirov and his family run in elite circles back home. They are known to have close ties to President Aliyev – who awarded Baguirov a medal for his efforts in the US – and he and his father serve in numerous advisory roles to the Azerbaijani and Russian governments respectively,” the report stated.

It is noteworthy that each time an Azerbaijani nonprofit or any kind of a council is mentioned, it turns out that they operate in Houston, or at least have originated from there.

“The estimated proposed budget for the conference  was $1.5 million. But it appears that its organizers had trouble securing the necessary funds. Two managers from ConocoPhillips told OCE investigators that Kemal Oksuz, the president of both hosting organizations, asked the corporation for a $250,000 sponsorship. But it eventually agreed to provide just $10,000, as did two other sponsors, McDermott and BP.

Reporters found no evidence that either Baguirov or his non-profit helped cover the shortfall. But his consulting company received the $253,150 Azerbaijani Laundromat payment six months later,” the OCCRP said.

“Oksuz has been active for years in several nonprofits that are part of the so-called Gulen movement,” the Houston Chronicle reported earlier in 2015.

Media reports show that Oksuz was engaged in similar activities at least as far back as 2003, when the Chicago Tribune reported that the Turkish-American is planning to open a new cultural center in Mount Prospect, Illinois.

“Niagara Educational Services, founded by Turkish-Americans in 1997 as a tutoring center, operates a kindergarten to 8th-grade Science Academy of Chicago, said Kevin Oksuz, who would serve as director of the new cultural center.

The organization's programs and outreach are cross-cultural, which would be reflected at the Mt. Prospect center. Programs would be developed based on "the needs, expectations and demands" of its members, and membership would be open to people of all religious and ethnic backgrounds, Oksuz said,” according to Chicago Tribune.

As intriguing and controversial as Kemal Oksuz’s past may seem, the fact that he – a top pro-Azerbaijani lobbyist with extensive ties - ended up being arrested in Yerevan is more bizarre, not mentioning that he was operating a business here since 2017. Moreover, his office was located in downtown Yerevan. Although the phone number listed in his company was unavailable, the business center, Elite Plaza, confirmed to ARMENPRESS that Kemal Oksuz’s The Sena Group, an event management and travel company, is registered in their premises.

It is unclear if Kemal Oksuz sought any hidden agenda.

Security services are yet to release a follow-up statement over the issue following the initial press release about the arrest.

The Facebook account of Oksuz’s Yerevan company, The Sena Group, appears to have been quite active in promoting their services.

As reported earlier, the document of registration of The Sena Group by Armenia’s state registry lists the date of foundation as 2017. But it is unclear when Oksuz had arrived to Armenia and whether or not he has traveled to the country in the past also.

Oksuz is currently under arrest pending further proceedings over the extradition to the United States.

On September 3, the Prosecutor General’s office told ARMENPRESS that Kevin (Kemal) Oksuz has been remanded into custody as requested by the prosecution.

By Stepan Kocharyan and Araks Kasyan