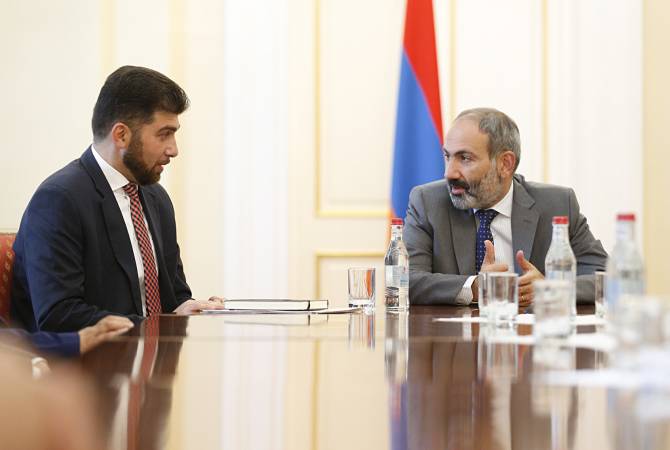 PM Pashinyan said the State Oversight Service has quite broad powers by law and expressed hope that Davit Sanasaryan’s activity will be productive.

“The main task of the Service is to keep under control the effectiveness of state expenditures, the implementation process of the government’s decisions and the PM’s instructions, including also in the anti-corruption field. I am convinced that the State Oversight Service will play a great role for the implementation of our political goal which is to eradicate corruption in Armenia. This is a very important issue and is inter-related with the efficiency of the state expenditures and implementation of decisions”, PM Pashinyan said. He stated that in order to achieve quick results, it’s first of all necessary to adopt right decisions and then to implement them. The PM attached importance to the increase of state revenues and stated that tangible and noticeable changes are needed in Armenia. Davit Sanasaryan is one of the active participants and leaders of the peaceful, velvet and national revolution in Armenia. I think the breath of that revolution should be expressed in the state oversight field. Mr. Sanasaryan, I  wish you success. Our people are waiting for results from us, and we should not disappoint them in any field of our activity”, the Prime Minister said.

In his turn Davit Sanasaryan thanked the PM for the high trust and considered honor to take part in the process of promoting the state’s foundations. “Authorized by the Constitution and laws the Service will carry out a serious activity, and I assure that the state will only benefit from this. The main mission of this newly-established State Oversight Service should be conducting control on the decisions and instructions of the government, the prime minister, contributing to effective expenditure of state resources, discovering and eradicating corruption which is important, and our citizens are waiting for this”, Davit Sanasaryan said, adding that the State Oversight Service will focus on increasing the efficiency of the state bodies, installing new culture in citizen-state relations and etc.

The PM summed up his remarks, emphasizing the correct interpretation of instructions and messages. “We often face cases when broad, creative comments are given to the instructions which have nothing to do with the essence of the problem. Our political statements often are being interpreted wrong. In particular, what we have said, now we again say and will continue stating that there should be no vendettas in Armenia: many interpret this as a “green light” for the continuation of old traditions. This record is very important: we have conducted a revolution of love and solidarity, but if anyone tries to describe our position as weakness, he/she will feel the power of that revolution, state and law. In other words, no one should dare to describe our positivism as weakness”, PM Pashinyan stated.

The PM added that all those who will try to keep the Republic of Armenia and its people in the swamp of corruption, permissiveness and illegal acts, will face a crushing counter response.