‘Why should we believe that your orientation towards Russia and EEU has changed?’ – ruling party MP to Pashinyan | ARMENPRESS Armenian News Agency

‘Why should we believe that your orientation towards Russia and EEU has changed?’ – ruling party MP to Pashinyan 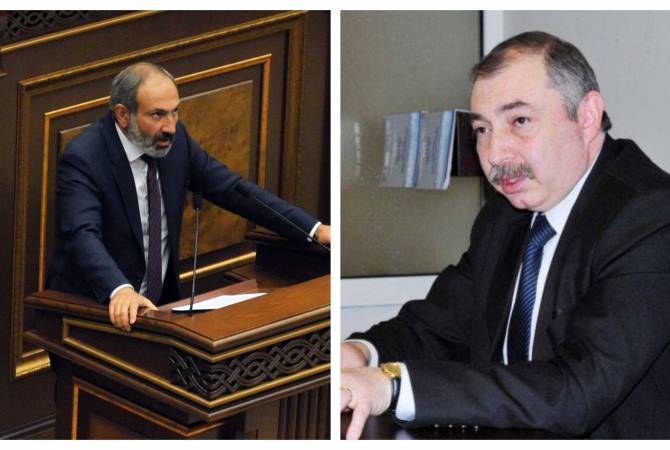 
YEREVAN, MAY 1, ARMENPRESS. During the ongoing pre-vote hearing, Republican Party (HHK) lawmaker Hayk Babukhanyan asked opposition leader Nikol Pashinyan, who seeks to be elected PM, on the ideas that he will be guided with if elected, on his stance regarding Russia and the EEU.

“We and you have deep ideological disagreements.  We are followers of national conservative ideology, you are liberal. When you were saying that not a single Republican candidate should be nominated for Prime Minister, did you in fact mean that the country should solely be guided with liberal ideas and that leading the country with national conservatism ideology shouldn’t be allowed? In addition, once you had said that you don’t know what national system of values means. Let me say that national ideology implies struggle against totalitarian sects, struggle against giving privileges to sexual minorities, against vulgar feminism and other anti-national ideologies. While the European liberal ideology displays tolerance to these issues. Next observation, you are endorsed abroad by such radical pro-Western politicians like Saakashvili, Navalny, while US Assistant Secretary of State Mitchell expressed unconcealed support to you. I think there are many pro-Western politicians in your circle also, and if we add on this the anti-Russian expressions, your initiative of withdrawing from the EEU in your pre-election program, then why should we know believe that your orientation for Russia, the EEU has changed?” – Babukhanyan asked.

In response, Pashinyan mentioned that in the modern world the delimitations associated with the so called “ism”s are disappearing consistently.

Now in an era when the most important issue is ensuring the happiness of people, I think it has absolutely nothing to do with any “ism”” Pashinyan said.

Regarding his past statements on withdrawing from the EEU, Pashinyan said that a situational change has happened today.

“An assessment was said and given in our pre-election program about Armenia’s membership to the EEU and there is no secret that we had voted against this decision. Our pre-election program says that risks exist there which must be managed. It is one situation when you are forced to address these risks as an opposition, but it is another situation when you can address these risks as the government.  The difference of the situations is that you have the chance to discuss these issues with colleagues and reach a common agreement. This is our attitude. In order to accurately assess this situation one must record one thing, I am obliged to present the collective opinion of the people, and even to  stand above what I’ve said in the past,” Pashinyan said.

Pashinyan also emphasized that he finds it to be inadmissible for any politician to be called pro-Western, pro-Russian, pro-American, pro-Iranian or pro-Georgian.

“Politics in Armenia should be done solely by pro-Armenian politicians. And I find the core of Armenia’s national ideology to be the following – the meaning of existence of Armenia, as a state, is the centralization of human spiritual, economic, financial potential in its own territory, and ensuring the security of this potential and normal development. And my greatest goal is to ensure a big repatriation,” he said.

The extraordinary sitting has kicked off in the Armenian parliament where lawmakers are debating the election of a new Prime Minister. 102 MPs are in attendance.

The only nominated candidate for Prime Minister is opposition leader Nikol Pashinyan.

Pashinyan was nominated by the opposition Yelk faction.

Two other factions – Tsarukyan and the ARF – have endorsed the opposition MPs candidacy.

Pashinyan will need at least 53 votes to be elected Prime Minister, which means he will require at least 6 votes from the ruling party.

16:31, 06.30.2022
2037 views Statements of Turkish officials that they coordinate the process with Azerbaijan are strange – Armenia’s Special Envoy