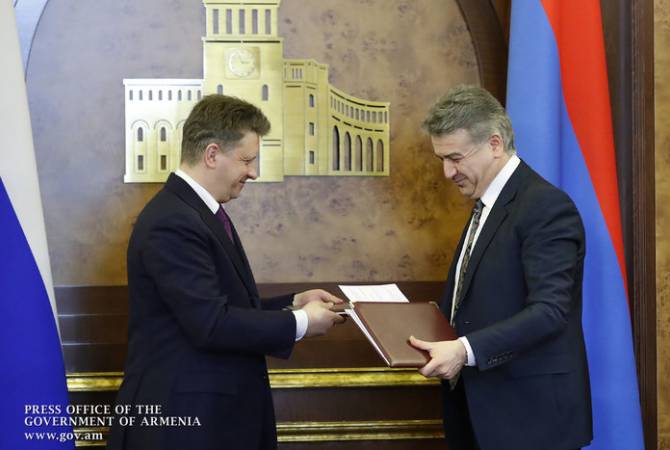 
YEREVAN, FEBRUARY 20, ARMENPRESS. The 18th session of the intergovernmental commission on economic cooperation between Armenia and Russia was held in the Armenian government led by co-chairs of the commission – Prime Minister Karen Karapetyan and Russian Minister of Transport Maxim Sokolov, the government told Armenpress.

The Armenian PM noted with satisfaction that what was outlined for 2017 has been implemented in practice. “We have growth at all figures. During a private meeting with Maxim Sokolov we have outlined all possible development points and the diversification paths of our relations. According to our data, in 2017 the Armenian-Russian trade turnover increased by 26.1%, the export from Armenia increased by 44.6% and the import by 19.1%”, the PM said. As for Armenia’s economic indicators, he noted that in 2017 the economic activity increased by 7.7%, the external trade turnover by 26.9%, the export by 25.2%, the import by 27.8%, the services field by 14.4%, the industrial growth comprised 12.6% and the inflation comprised 2.6%.

“In January 2018 compared to January 2017 the economic activity growth comprised 10.2%, the industrial growth – 13.9%, the construction growth – 19.7%, the external trade turnover growth – 47.6%, the export growth – 45.2%, the import growth – 48.9%, the services growth – 15.5%. We are at a good development path and are interested in maximum participation of our Russian friends and partners in this”, the Armenian PM said, stating that the intergovernmental commission is one of the most important platforms for Armenian-Russian bilateral cooperation. The PM informed that they agreed with Maxim Sokolov to set concrete responsible persons at different directions aimed at moving forward the programs. “Today Armenia, not being a big market, can attract our partners, investors by being as an EAEU member, having privileged access to the Eurasian market worth 180 million. The Meghri Free Economic Zone was an important subject of discussion in the context of the programs of signing free trade agreement between the EAEU and Iran. I think this platform will be quite unique”, he said, attaching importance to the entry of the Russian capital to the FEZ.

“Taking into account the GSP+ regime with the EU, the opportunities of the GSP trade systems with the US, Canada, Japan, Switzerland, Norway, we are ready to create favorable conditions for the Russian capital in Armenia so that it will operate here based on its interests”, PM Karapetyan stated.

In his turn the Russian minister thanked the Armenian PM for the constructive assessment to the works done within the frames of the intergovernmental commission. He said, after the last session of the commission held in July 2016, numerous meetings were held at bilateral format, as well as between the members of the intergovernmental commission and the agencies of the two countries. “Our mutual partnership has always been at a high level, and it can be stated that it reached to a new level, and this is reflected in the economic results. By absolute numbers, the bilateral trade turnover reached a record level in the history of our cooperation, more than 1 billion 700 million USD. It’s welcomed that the supply volume of Armenian products to the Russian market is rapidly increasing: according to our assessments, it increased by more than 1/3 last year compared to 2016. We link this not only with the stable development of Armenian and Russian economies, but also with the deepening of integration on the sidelines of the Eurasian Economic Union”, Maxim Sokolov said.

He agreed with the Armenian PM that by joining the EAEU Armenia received an opportunity to enter that big market. “All this, together with the efforts made by the Armenian government, creates preconditions for increasing the foreign direct investments flow in Armenia, and we see the interest of the Russian capital. Today’s meeting is attended by our partners who are going to develop their programs in the fields of road construction, public-private sector cooperation and IT, in all spheres of our partnership”, the Russian transport minister said.

The session touched upon issues relating to expanding the cooperation in energy, transport, industry and aviation spheres, as well as developing the small aviation, tourism and etc.

Within the frames of the session the Armenian PM and the Russian minister held a private meeting during which they discussed a number of issues relating to the bilateral cooperation agenda, attached importance to the intensification of the Armenian-Russian commercial ties and the constant steps aimed at boosting the trade turnover. In this context the officials highlighted the active work of the intergovernmental commission and the regular meetings.