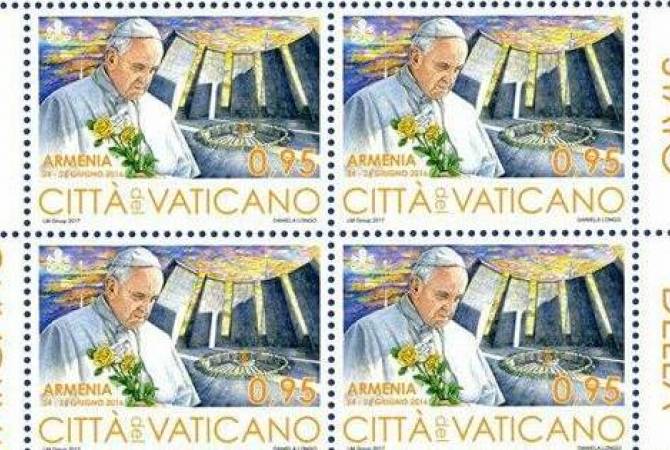 Among the postage stamps there is one dedicated to Pope’s historical visit to Armenia.

Pope Francis is depicted on the stamp, and behind him is the Tsitsernakaberd Armenian Genocide Memorial.

The author of the postage stamp is Daniela Longo who depicted Pope’s prayer in Tsitsernakaberd.

Pope Francis visited the Armenian Genocide Memorial on June 25, 2016 to pay tribute to the memory of the innocent victims.

Pope left a note in the Honorary guest book of the Armenian Genocide Museum-Institute: “Here I pray with pain in my heart, so that never more will there be tragedies like this, so that humanity does not forget and knows how to overcome the evil with good. May God grant the beloved Armenian people and the entire world peace and consolation. May God protect the memory of the Armenian people. Memory should not be diluted or forgotten. Memory is source of peace and the future”.

Pope Francis visited Armenia on June 24-26 under the title ‘Visit to the first Christian nation’.

13:12, 05.10.2022
2486 views Armenia’s proposals handed over to Azerbaijan in Brussels include also status, security of Artsakh – Ambassador-at-large