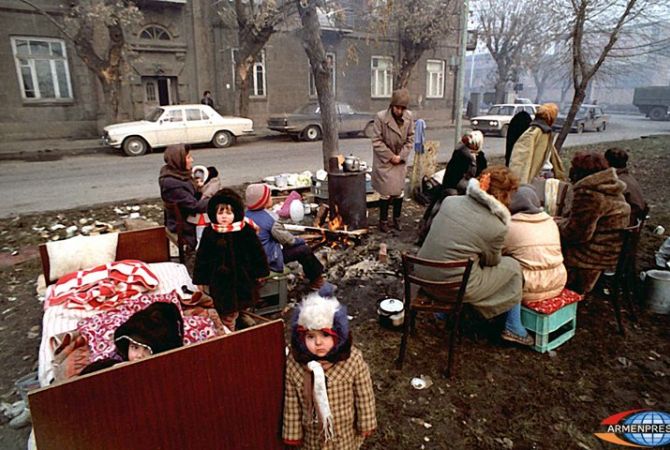 
YEREVAN, DECEMBER 7, ARMENPRESS. The Spitak earthquake shattered the peace of Armenia 27 years ago. A 10 magnitude near the epicenter devastating earthquake took place in 40% of the territory of Armenia at 11:41 (local time), December 7, 1988. Spitak, Leninakan, Kirovakan, Stepanavan towns, over hundreds of villages and settlements of Spitak, Akhuryan, Gugark, Aragats, Kalinino, Stepanavan were fully or partially demolished during a few seconds.

More than 25 thousand people died, 500 remained homeless. 17 of the housing resources broke down (over 8 million square meters of living area). 230 industrial objects with 82 thousand workplaces were ruined due to the quake. The economic damage of Armenia amounted to 13 billion RUB.

The commission headed by Nikolai Ryzhkov, Chairman of the Council of Ministers of the USSR, arrived in Armenia on the next day of the earthquake. They performed a great job with care and many efforts to assist the people and eliminate the consequences of the tragedy.  The Armenian people received the aid with gratitude, awarding Ryzhkov with decoration of the National Hero of Armenia on December 6, 2008. More than 113 countries and 7 international organizations aided Armenia.

Hundreds of rescuers and doctors arrived in the Republic of Armenia. All the republics of the USSR started to transport medication, medical equipment, construction equipment, tents, food etc. to Armenia.

The Armenians of the Diaspora united from the first hours of the earthquake to provide assistance to their compatriots, creating many organizations for that aim. Many of them; doctors, psychologists, constructors, architects stayed in Armenia to personally participate in rescue and restoration works.

Ian Gillan, rock legend, lead singer and lyricist for Deep Purple, and his musician colleagues also had their contribution to the elimination of the consequences of the devastating quake. They participated in the charity action Rock Aid Armenia. The British rock stars recorded “Smoke on the Water” and released Earthquake Album in 1989. All the proceeds raised were provided to Armenia which had been affected by the Spitak quake.

11:29, 05.19.2022
3241 views U.S. recognizes role of population of Nagorno-Karabakh in deciding its future–Ambassador Tracy’s interview to ARMENPRESS