32 years ago on this day, Azerbaijan's state-sponsored massacre of Armenians began in Baku 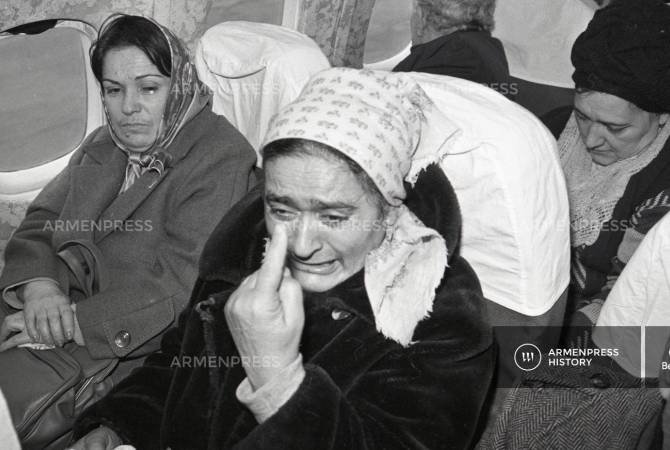 
YEREVAN, JANUARY 13, ARMENPRESS. Thirty-two years ago on this day, Azerbaijanis began a state-sponsored massacre of the Armenian population in Baku, which became known as the Baku Pogroms.

Tens of thousands of Armenians fell victim to the cruel atrocities or forced displacement.

The Baku Pogrom began in 1990 January 13th and lasted until January 19th. It was a state-sanctioned pogrom organized by the Azerbaijani Popular Front. After the six days of atrocities, Baku – the city once having an Armenian population of 250,000 – had no Armenians left.

The anti-Armenian hysteria in Azerbaijan had risen back in late 1988 and early 1989.

On January 13, 1990 a mass rally took place with the attendance of thousands. Afterwards, the crowd separated into smaller groups and started attacking and murdering Armenians in their homes with extreme cruelty. The perpetrators had the addresses of their would-be victims. The mob would defenestrate their victims from their apartments, kill them with metal pipes and knives, women were raped, and many were burnt alive.

Only six days later, when the Soviet authority was jeopardized in Baku, Mikhail Gorbachev ordered a state of emergency in the Azerbaijani capital to restore public order. More than a dozen militants were killed during an armed resistance with the troops, and many were arrested.

Since evidence and facts were concealed and covered up, the exact number of Armenians who were killed during the pogroms was impossible to be revealed, but according to various estimates at least 500-600 were murdered from 1988 to 1990. The anti-Armenian pogroms went on even after 1990 January, leading to a complete and forced exodus of Armenians.

Despite the Azerbaijani denialist policy, the Baku Pogroms, and the preceding Sumgait Pogrom of 1988, as well as in Kirovabad (Gyanja), have been condemned by a number of international organizations. The pogroms against the Armenians were condemned by the European Parliament in resolutions adopted in 1988, 1990 and 1991. In 2002, United States Committee for Refugees Director Bill Frelick recorded and spoke about the consequences of the Baku Pogroms.

Eyewitness accounts, as well as the above-mentioned resolutions, indicate that the anti-Armenian actions in Baku and Sumgait were of organized nature or at least were carried out at the permission of the then-Azerbaijani authorities.