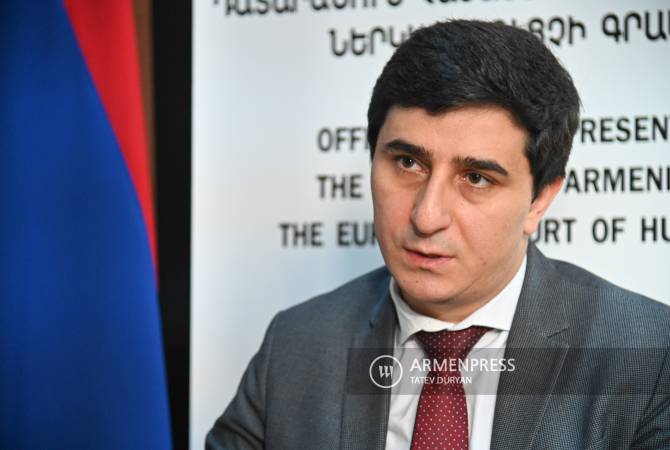 
YEREVAN, OCTOBER 14, ARMENPRESS. During today’s hearings at the International Court of Justice, convened over Armenia’s request to indicate provisional measures against Azerbaijan, Armenia has presented at best its position, convincing evidence and facts, expecting that the Court will take into account all these facts, Representative of Armenia before the European Court of Human Rights (ECHR) Yeghishe Kirakosyan told Armenpress.

Kirakosyan is representing Armenia’s interests at the Court hearings.

“In the first part of the first day of the hearings Armenia presented its claims and legal facts, proofs which justify the circumstances of Armenia’s demand to apply urgent measures. This was the first stage, which will be followed by Azerbaijan’s response in the second half of the day. In the morning again Armenia must present its counter-arguments. I think it will be summed up with Azerbaijan’s response by the end of the day”, he said.

The Court’s response will be in the form of a decision. The Court is expected to make a decision in 1-1.5 months.

“I think Armenia with its team managed to present at best and in details the Armenian positions, the facts and evidence. We will wait for the response. We are confident that we have presented maximally in the best way”, Yeghishe Kirakosyan said.

During today’s hearings Armenia presented facts both about the confirmed captives and the unconfirmed captives. The representatives of Armenia stated that there are proofs about the captivity of these persons. They cited photos, videos, which prove ill treatment against the Armenian captives. Kirakosyan assured that Armenia presented numerous facts and videos, and all judges have been provided with all these evidence.

Armenia went to the international court with an expectation of justice. “I think this is a very important step. The future course will show, but the expectation from the Court is to take into account the convincing proofs and facts presented by Armenia and take actions on this direction. What we expect from the Court is the decision to apply an urgent measure. We wish that all our demands are met, because we are sure that our demands are well-grounded. Justice is our expectation”, he said.

He stated that the International Convention on the Elimination of All Forms of Racial Discrimination, based on the violation of which Armenia appealed to the Court, plays a vital role in the international law. “The obligations deriving from the Convention are fundamental, therefore, the strict observance of this document is very important both for atmosphere, peace and security”, Yeghishe Kirakosyan said.

The International Court of Justice, the principal judicial organ of the United Nations, is holding public hearings over Armenia’s request to indicate provisional measures against Azerbaijan.

11:29, 05.19.2022
2911 views U.S. recognizes role of population of Nagorno-Karabakh in deciding its future–Ambassador Tracy’s interview to ARMENPRESS