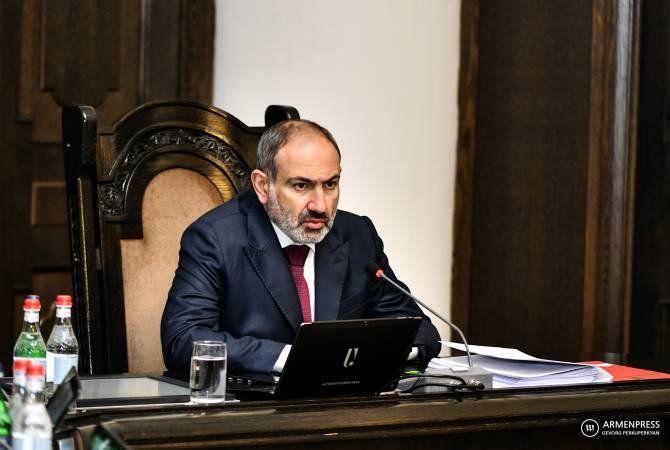 
YEREVAN, AUGUST 12, ARMENPRESS. Prime Minister Nikol Pashinyan reiterated that identifying the initiator of ceasefire violations at the Armenian-Azerbaijan border and targeted condemnation of provocative actions has high significance for further de-escalation and stabilization of the situation. At the same time, the prime minister noted that this function is difficult to imagine without introducing an international monitoring mechanism.

Speaking at the Cabinet meeting, PM Pashinyan said that the OSCE Minsk Group Co-Chairs’ call to refrain from provocative actions and statements is definitely acceptable for Armenia.

“If the issue of tracing the provocative statements isn’t any difficult, the issue of the initiating side of provocative actions and ceasefire violations is always giving way for disputes. I’ve said this before and I still think that pointing out the initiating side of the ceasefire violations and targeted condemnation of those provocative actions has significant importance for future de-escalation and stabilization of the situation. Nevertheless, it is hard to imagine such function without introducing an international monitoring mechanism. I have addressed this issue at the July 29 Cabinet meeting, by saying that this must be a CSTO monitoring mission, and if this isn’t acceptable for the CSTO, the alternative left is a monitoring mission of the OSCE MG co-chairmanship,” Pashinyan said.

Pashinyan reminded that during the July 29 Cabinet meeting he outlined the Armenian government’s viewpoint over de-escalation in the region, actions for establishing lasting peace and stability, and emphasized Armenia’s readiness to work with international partners in this direction.

“On July 29 the OSCE Minsk Group Co-Chairs also delivered a statement, the key message being the initiation of steps for decreasing the tension at the Armenian-Azerbaijani border, a call addressed to Azerbaijan and Armenia on refraining from provocative steps and statements, as well as resumption of the negotiations under the auspices of the Minsk Group Co-Chairmanship over comprehensive and lasting resolution to the conflict. The Armenian foreign ministry issued a statement on July 30, welcoming the co-chairs’ statement, thus expressing Armenia’s commitment to resuming peace talks under the auspices of the co-chairmanship.”