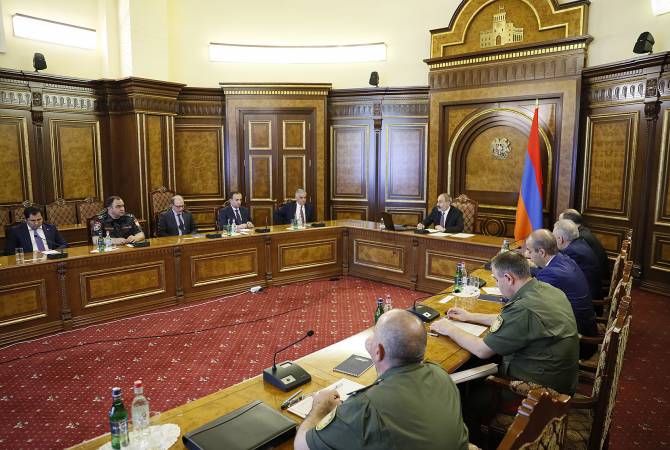 In his speech, Pashinyan briefed the members of the Security Council on latest updates from the situation at the Armenia-Azerbaijan border.

“Since May 12, when servicemen of the Azerbaijani armed forces breached the Armenia-Azerbaijan border, the situation had the following change or more accurately had the following dynamics: Starting May 14th, some groups of the [Azeri] servicemen pulled back from Armenian territory, a similar process also took place yesterday evening, and there are signs that this could happen today as well, but overall I find the military-political situation to be unchanged since May 12. Meaning, no big changes from military-political perspective took place, some groups pulled back, but the situation hasn’t changed from that. What does this mean? This means that we must continue to initiate the Collective Security Treaty Organization’s mechanisms and we must continue working in the direction of utilizing the Armenian-Russian allied mechanisms. Our position is unambiguous – the Azerbaijani servicemen must leave the territory of the Republic of Armenia,” Pashinyan said, noting that despite his warnings this situation has become a topic for domestic political manipulations.

Pashinyan slammed those who are manipulating this issue and labeled them as “carrying out
pro-Azerbaijani activities behind our backs.” He was particularly speaking about the manipulations about the so-called Zangezur Corridor, a narrative brought forward by the Azeri leader but denied by Armenian authorities to have anything to do with reality.  Pashinyan said those who are developing the narrative in Armenia are “agents of Azerbaijan’s information war”.

“I want to emphasize that the Republic of Armenia has never and will never discuss a corridor. The discussions which we had are public, they are reflected in the January 11 joint statement and the official information regarding the activities of the trilateral working group,” Pashinyan said.

“The next issue I’d like to emphasize is the process of border adjustments and Armenia needs the processes of border adjustment and the opening of communications as much as Azerbaijan does. And in terms of border adjustments there is this kind of a nuance: In the recent days the Azerbaijani propaganda is trying to advance a narrative that the border adjustment process should take place in a bilateral format. Such thing can’t happen with the simple reason that Armenia and Azerbaijan don’t have relations basically. And both the opening of communications and the border adjustment processes must take place in a trilateral format, around which agreements have been reached several times, and I think that it is also the violation or disruption of these agreements which is the reason of actions of the Azeri military and military-political leadership,” he said, presenting future actions.

"The negotiations continued until late night yesterday, the talks will continue Wednesday,” Pashinyan added. "The negotiations have one subject – the Azerbaijani military servicemen must pull back from the territory of the Republic of Armenia. As long as this hasn’t happened, we consider this issue, this situation to be a crisis which threatens the sovereignty, stability and territorial integrity of Armenia, a situation which is termed by the Collective Security Treaty Organization’s charter, the Treaty on Collective Security and the charter of the Treaty of Collective Security on Crisis Situation Response. As long as our legitimate objective isn’t solved, all these mechanisms and simultaneously the Armenian-Russian allied mechanisms must be invoked, which are envisaged for such cases,” Pashinyan said.

Pashinyan added that the solution to the issue must be reached politically. “And if such a result won’t be possible to be achieved, then with the same logic the military-political mechanisms must be initiated. I mean that the Collective Security Treaty and the Armenian-Russian treaties envisage functions and these treaties are envisaged for this very cases, and we – using our legitimate right, have initiated the launch of these actions,” Pashinyan said.

Pashinyan later stated that tension and aggressiveness by Azeri troops is growing after this meeting of the security council.