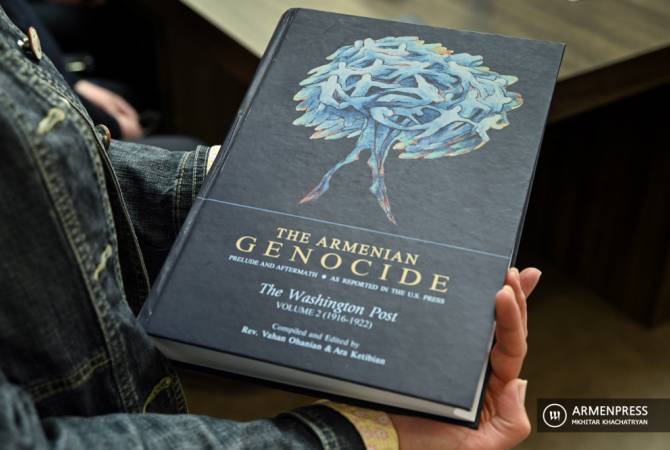 
YEREVAN, APRIL 16, ARMENPRESS. The publications of The Washington Post on the massacres of the Armenian people and the Armenian Genocide in Ottoman Turkey during the period of 1890-1922 have been collected and printed in a two-volume book called ''The Armenian Genocide: Prelude and Aftermath. As referred in the U.S. press''. ARMENPRESS reports the books are compiled and edited by father of the Mekhitarist Congregation of Venice, Reverend father Vahan Ohanyan and Ara Katibyan.

The two-volume book of the Washington Post's publications on the Armenian Genocide of the period of 1890-1922 contain huge valuable information for researchers and ordinary readers, Director of the Armenian Genocide Museum-Institute Harutyun Marutyan said during the presentation of the book.

''The positive attitude of the U.S. Government and the people towards the Armenian Genocide survivors during those years and afterwards was also conditioned by the in-depth coverage of the Armenian massacres by the American press’', Marutyan said.

''What was said about Armenians in the US Congress was covered by the newspaper. It is noteworthy that in those years diplomatic and political secrets were not kept as strictly as they are now. There are many articles that contain letters from Washington to the US Embassy in Turkey'', Ara Katibyan said.

The first volume, in particular, presents the publications of The Washington Post about the massacres in Turkey in 1890-1900.

The second volume contains 1,200 articles on the Armenian Genocide during 1916-1922, Armenians and Armenian topics.