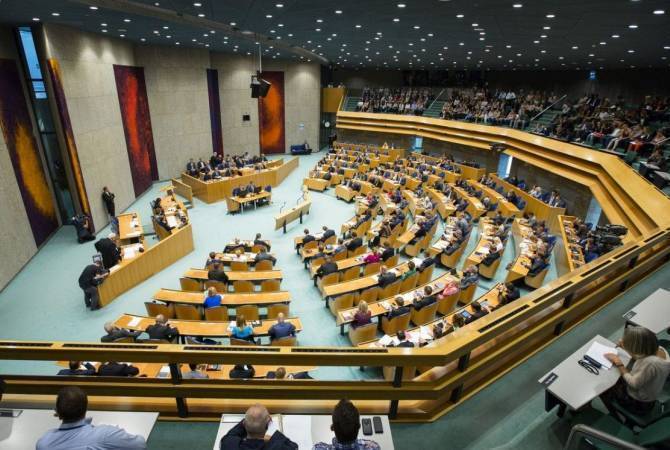 
YEREVAN, NOVEMBER 17, ARMENPRESS. The Dutch Parliament has adopted the resolutions on imposing individual sanctions against the president of Azerbaijan Ilham Aliyev, his wife Mehriban Aliyeva, Turkish president Recep Tayyip Erdoğan  and others for war crimes and atrocities against Artsakh, ARMENPRESS reports Ambassador of Armenia to the Netherlands Tigran Balayan wrote on his Twitter page.

The Ambassador also informed that the EU imposed an embargo against supplying arms to Turkey for participating in the aggression.

The resolution authored by Sadet Karabulut calls on the parliament of the Netherlands to impose individual sanctions against those in Azerbaijan and Turkey who are responsible for the violence in Nagorno Karabakh.

''In light of the fact that violence between the Nagorno-Karabakh enclave between Armenia and Azerbaijan has resurfaced in recent months, noting that the latest attempt of violence was initiated by Azerbaijan with the encouragement of Turkey, the MP calls on the government to impose individual sanctions on those individuals in Azerbaijan and Turkey, who are responsible for these atrocities'', reads the resolution.

Another resolution offers imposing individual sanctions on Azerbaijani president Ilham Aliyev and his family members and key individuals in connection with the Azeri attack and the deployment of Syrian militants in Nagorno-Karabakh by Turkey.

''Based on the fact that Azerbaijan and Syrian jihadists sent by Turkey have committed large-scale war crimes in Nagorno Karabakh in the last 5 weeks, considering that Genocide Watch has alerted that there is an unnoticed genocide, we call on the government to pursue at the EU level personal sanctions against Azerbaijani President Ilham Aliyev, his family members and key individuals over the Azerbaijani attack and Turkish deployment of Syrian militants in Nagorno-Karabakh'', reads the second resolution.

!!!Breaking!!! Dutch Parliament adopted motions on individual sanctions against @presidentaz, @1VicePresident for #WarCrimes and atrocities against Artsakh, #EU wide arms embargo against Turkey for its complicity in aggression. https://t.co/uFVQJsljJK