I am blind, but I act, while intl. community sees but doesn’t act – Artsakh’s Human rights Defender 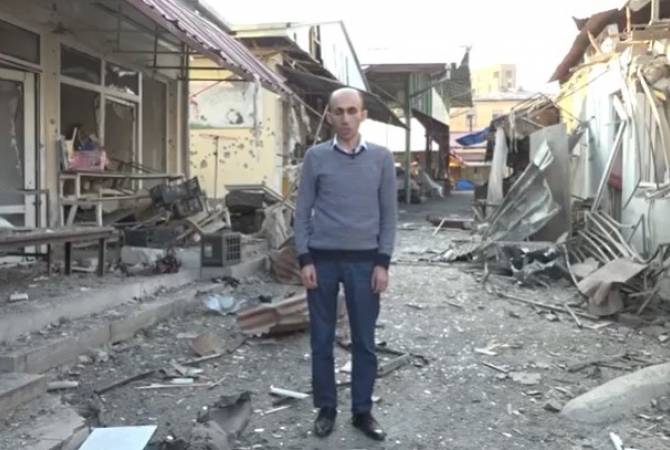 
YEREVAN, OCTOBER 31, ARMENPRESS. Human Rights Defender of Artsakh Artak Beglaryan, who lost sight while a child as a result of the explosion of an Azerbaijani bomb, calls on the international community to act seeing what Azerbaijan is doing with the civilian population, ARMENPRESS reports Beglaryan said in a video message from Stepanakert’s central market, targeted by Azerbaijan on October 31.

‘’Ironically, this shelling happened just after the agreement between Armenia and Azerbaijan with the OSCE Minsk Group Co-chairs mediation, saying that the parties will not deliberately target civilian objects, but you see that they targeted a civilian object, very far from any military objects, in downtown of Stepanakert. And because of this shelling many shops have been destroyed or damaged seriously and there are lots material losses. Besides, Azerbaijan shelled residential areas of Stepanakert, Shushi, Martuni, Martakert and some other towns and villages’’, Beglaryan said, adding that a civilian has died as a result of the Azerbaijani shelling.

‘’This means that Azerbaijan is continuing war crimes against the civilian population of Artsakh. Azerbaijan is deliberately targeting civilian objects and vital infrastructures in order to deepen the humanitarian catastrophe in Artsakh. And in this situation, I see that there are many destructions, though I am blind, I see with touching, I am blind, but I act, but the international community is not blind, but does not act. The international community sees everything without touching, with eyes, but it does not act properly. That’s why this kind of crimes are continuous by Azerbaijan, by Turkey and by terrorists. My call to the international community as a blind and as a Human Rights Ombudsman of the Republic of Artsakh is that they should start acting, stop talking and should not be blind’’, Artak Beglaryan said.