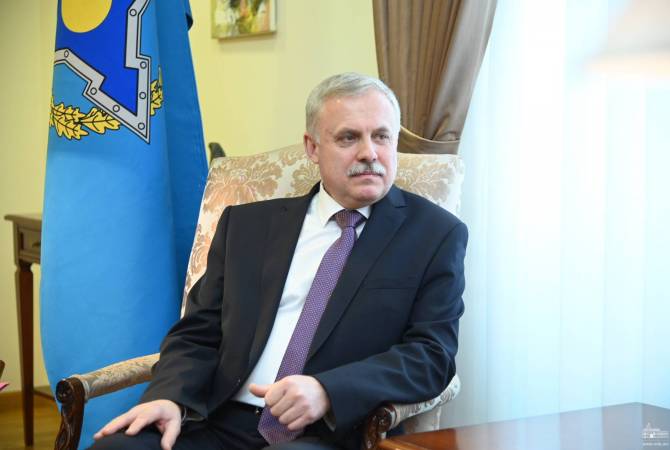 
YEREVAN, APRIL 1, ARMENPRESS. CSTO Secretary General Stanislav Zas has expressed concern over the ceasefire violation that took place on March 30th at the Armenia-Azerbaijan border which resulted in two Armenian soldiers and one civilian – a 14-year-old child – being wounded.

Zas told ARMENPRESS the fact that this incident is taking place when the international community is unitedly combating the coronavirus pandemic is perplexing.

ARMENPRESS: Days ago, as a result of the Azerbaijani ceasefire violation at the border with Armenia two Armenian servicemen and one 14-year-old resident of the Voskevan village were wounded. As CSTO Secretary General, how would you comment on this type of a provocation against a CSTO member country?

Zas: I’ve been informed by the Armenian side about the incident that took place at the Armenia-Azerbaijan border. The fact that this has resulted in two servicemen and the [14-year-old] resident of Voskevan being wounded is very concerning. At the same time, I would like to express concern regarding this kind of an incident in the CSTO zone of responsibility – at the border of a member country of the organization.

It is perplexing that the escalation is happening at a time when the international community is waging a united battle against the coronavirus pandemic. In this regard I am calling on the parties to the conflict to heed to the UN Secretary General’s calls on a global ceasefire. By the way, as far as I know Armenia has officially endorsed this call. I would also like to underscore the importance of the implementation of the agreements reached by the leaders of Armenia and Azerbaijan in terms of ceasefire in the conflict zone, and I wish the victims of the incident speedy recovery.

On March 30, the Azerbaijani military attempted a subversive incursion in the direction of Armenian positions in the Noyemberyan region of Tavush province. The adversary attack was thwarted, but the Azerbaijani troops also opened fire at civilian settlements, wounding a child.