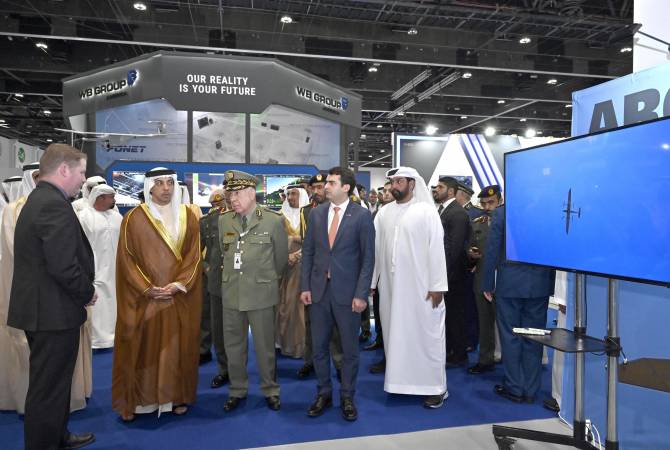 
YEREVAN, FEBRUARY 26, ARMENPRESS. Armenia’s Minister of High Tech Industry Hakob Arshakyan led a delegation to the UMEX and SimTEX 2020 in Abu Dhabi February 22-23.  UMEX/SimTEX is dedicated to defense technologies, robotized and unmanned systems and the maximal utilization of these technologies in the future.

The event was organized under the Patronage of Sheikh Mohamed bin Zayed Al Nahyan, Crown Prince of Abu Dhabi and Deputy Supreme Commander of the UAE Armed Forces.

Arshakyan attended the event at the invitation of the UAE State Minister of Defense. The Armenian High Tech Industry minister delivered keynote remarks at the conference and had a number of meetings with high-level officials to discuss prospects of partnership.

During a meeting with Mohammed Ahmed Al Bowardi , the Minister of State for Defense of the UAE, Arshakyan was briefed on the “Soldier of Future” program that has been introduced in the Emirati military. Al Bowardi highlighted the Armenia-UAE partnership and pointed out the need to deepen and develop relations especially in the military industry and defense sectors.