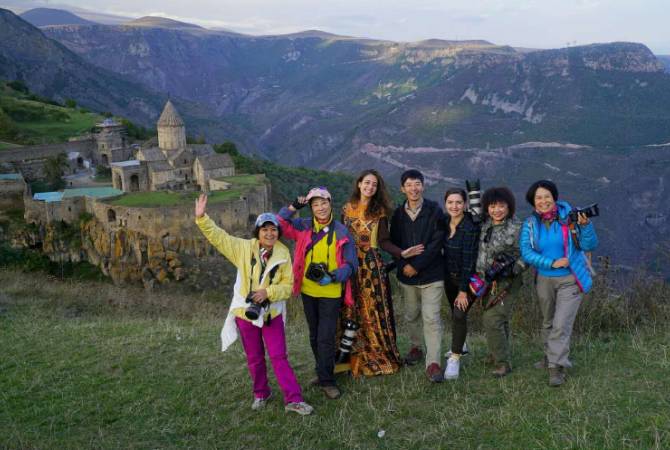 Founding director of Sotu Travel LLC Sona Sahakyan is working in the tourism sector already for several years, mainly on the direction of China. She told Armenpress that there is huge potential in this direction but is not fully utilized which means that active works are needed to be done.

Sona Sahakyan moved to Armenia in 2015 from the Russian city of Irkutsk. She studied Chinese as this language was widely used in that city.

“Years ago I visited my relatives in Armenia. At that time I got acquainted with director of the Confucius Institute Gor Sargsyan. I had a chance to visit that Institute to get acquainted with the teaching staff, and they advised me to apply to the Chinese Embassy in Armenia as the latter was looking for an assistant to the Consul. Success came to me as I started working following the interview”, she said. “The Embassy was a good opportunity for me in terms of gaining experience. I liked working with the delegations. The organization process, developing program, hosting and guiding them was a pleasure for me. I decided to open a tour agency, focusing on the Chinese direction. I thought that I have communication skills, had no problems with Chinese, that’s why I started my job. And now my tourism agency is working quite actively”, Sona Sahakyan said. She remembered the work with the first group of Chinese people. It was a photo-tour, the guests were professional photographers. They stayed in Armenia for six days, visited several historical-cultural sites and revealed the country thanks to the specialists of the tour company.

Sona Sahakyan said they carry out consistent works to raise awareness on Armenia. They are participating in tourism exhibitions in China and are also working separately with the tourism agencies.

“This is not just a business initiative for me. I see here love towards the job, an interest and patriotism. I think that if you look at your work only from commercial perspective, sooner or later you will fail”, she said.

Sona Sahakyan said mainly those Chinese people visit Armenia who traveled a lot, but now are looking for new discoveries. Sona said the Soviet Union is in their memory, and now, by having this chance, they want to visit the post-Soviet states. Chinese tourists mainly are conducting a regional visit, as they visit Armenia, Georgia and Azerbaijan.

Sona Sahakyan said Chinese tourists like the Armenian cuisine a lot. They like very much the Armenian lavash, soups, vegetables, and of course, the barbeque.

Talking about the upcoming programs, Sona Sahakyan said they want to bring tourists from China as much as possible. According to him, the initiative on lifting the visa regime is very important, but the absence of direct flight makes difficult their work. She highlighted the need of increasing the number of Chinese-speaking tour guides.