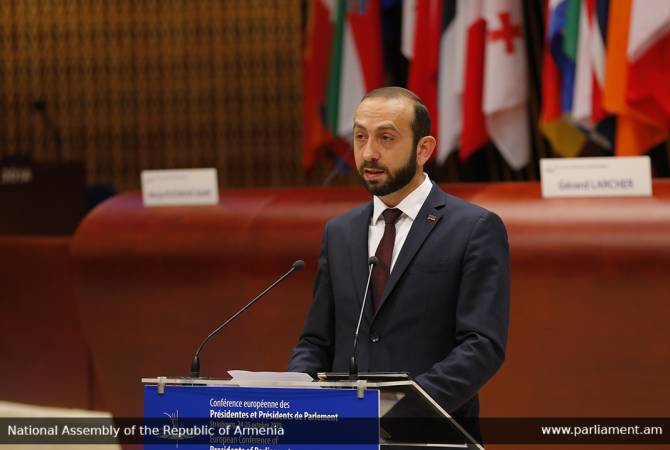 Armenpress presents the full text of the Speaker’s speech:

It is a real honor for me to be here today, in the Chamber of the organization that 70 years ago embarked on a fascinating, yet difficult journey of creating a Europe united in its determination to establish societies based on universal system of values with a human being, human rights and democracy at its center.

Using this opportunity, I would like to focus on recent changes and developments in Armenia. The non-violent peaceful revolution that happened in my country last year was purely about democracy, rule of law, human rights, independent judiciary and free and competitive economy. The revolution ended the nightmare era of injustice, systematic corruption, oligarchy, falsification of results of elections etc. Under the strong pressure of citizens, the anti-democratic forces were driven out from power in May 2018. The snap parliamentary elections in December of the same year, which were marked as unprecedented free and democratic by international observers, became the final manifestation of democratic changes designing current features of executive and legislative powers. During this one and a half year we have already managed to initiate some substantial political, economic, judicial reforms making sure that the democratic developments in Armenia are irreversible. However, there still exist some challenges and threats our young democracy is facing and countering that I would like to share with you.

The large-scale fight against corruption, investigation of many cases on corruption, illegal enrichment, as well as massive violation of human rights at some point certainly deal with the judiciary. Unfortunately, some in Judiciary haven’t gone through the process of self-transformation being most probably and presumably themselves engaged in corruption and illegal enrichment (investigations are going on and respect for presumption of innocence doesn’t allow me to say more) and/or having strong visible political motivation and political affiliations to the corrupt and antidemocratic forces fully rejected a year ago by the citizens of Armenia.

I am sad to say, but the Constitutional Court of Armenia does not stay apart from these negative processes and in the eyes of people is perceived to be the symbol of the systematic injustice and a last stand of the past regime. The body, which ought to protect the constitution, ensure its supremacy and assure the checks and balances, is acting rather as a group of politically motivated people, deviating from their constitutional mission and consequently being a threat to common democratic values, which unite us under the umbrella of the Council of Europe.

We, the democratic and legitimate Parliament and the Government of Armenia, cannot keep a blind eye to the degradation of rule of law and collapsing of democratic institutions in our country. This situation is an imminent threat to constitutional security and stability which may ruin the new democratic fundament of Armenia if appropriate measures would not be implemented. Unfortunately, there are no proven universal solutions for such situations which we might usually see in transitional societies or young democracies. In some cases, young democracies fail to overcome these kinds of challenges remaining in a trap where literal interpretation of written procedures is underestimating the spirit and philosophy of law.

Anyway, I want to restate that the settlement we will find in Armenia, will be in accordance with incontestable principles of democracy, human rights, institutional values and the spirit of law. Because these are core values of Armenian leadership and Armenian society, and Armenia will definitely continue its way based on these values.

It is a big honor for us to be united with CoE having these values in common and we will stand for them locally, regionally and globally”.