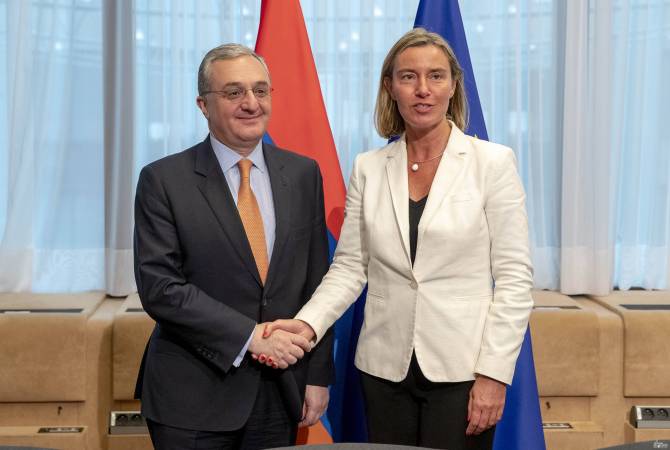 
YEREVAN, JUNE 13, ARMENPRESS. The second Partnership Council meeting between the European Union and Armenia took place in Brussels on 13 June 2019, the Armenian foreign ministry told Armenpress. The Council reaffirmed the commitment of the EU and Armenia to implement effectively the Comprehensive and Enhanced Partnership Agreement (CEPA). This ambitious agreement can play an important role for the modernization of Armenia, in particular through legislative approximation to EU norms in many sectors. The Council highlighted the paramount importance of the rule of law and respect for human rights, which includes an independent, efficient and accountable justice system.

In this context, the EU welcomed the conduct of the December 2018 Parliamentary elections in Armenia, which were held with respect for fundamental freedoms and enjoyed broad public trust. The EU and its Member States significantly contributed to the smooth organization of the elections. The EU reiterated its readiness to work closely with the democratically elected authorities to deepen political and economic relations with Armenia.

The CEPA implementation roadmap, adopted by Armenia on 1 June 2019 following consultations with civil society, was welcomed by the Council as an important tool underpinning reforms in the country. The EU and Armenia will continue working closely together to monitor progress and to ensure the successful implementation of the CEPA, including through the use of EU assistance.

The Council underlined the importance of an independent, efficient and accountable judiciary which contributes not only to the protection of human rights but also to a business environment favorable to economic development and foreign investment. The Council welcomed the current efforts aiming at comprehensive judicial reform in Armenia in accordance with the Armenian Constitution and with international standards. Following the launch of an EU-Armenia dialogue on judicial reform in September 2018 the EU stands ready to provide further support for comprehensive judicial reform based on a justice reform strategy.

The Council underlined the importance of improving the business climate to promote foreign investment, jobs growth and poverty reduction. It welcomed Armenia's intention to establish a full-fledged system for labor inspection, which can ensure due supervision and control of labor standards, rights and working conditions in line with international principles. The CEPA has significant potential to increase EU-Armenia trade flows. The start of discussions on the implementation of the CEPA provisions on the protection of geographical indications, including the relevant EU financial and technical assistance, is a positive step.

The Council reviewed cooperation on energy, transport, environment and climate change, including Armenia's participation in the Eastern Europe Energy Efficiency and Environmental Partnership (E5P), the extension of the indicative core TEN-T network to Armenia in February 2019 and cooperation under the EU-funded regional project EU4Climate. In this context, the EU will provide support for the priority infrastructure projects communicated by Armenia's Prime Minister Nikol Pashinyan to the President of the European Commission, Jean-Claude Juncker, during their meeting in Brussels in March 2019. The Council also welcomed the launch of a dialogue on education reform in March 2019. To improve the mobility of citizens and people-to-people contacts, the EU and Armenia will continue promoting the mobility of citizens through the Visa-facilitation and the Readmission Agreements and consider in due course the opening of a Visa-liberalization Dialogue, provided that conditions for well-managed and secure mobility are in place.

The Council recalled that the EU had earmarked more than €160 million in assistance for Armenia for 2017-2020. In recognition of Armenia's determination to pursue a reform agenda and to implement the CEPA effectively, the EU will allocate an additional €25 million in the context of its 2019 Annual Action Plan of assistance for Armenia. The Council stressed the need to make the best use of these resources to maximize the impact of reforms and to improve the living conditions of the citizens in a visible and tangible manner.

Finally, the Council discussed regional and international issues. The EU reiterated its support to the OSCE Minsk Group Co-chairs' efforts aimed at finding a peaceful solution to the Nagorno-Karabakh conflict. The EU stands ready to support initiatives aimed at overcoming the conflict divide and preparing populations for peace. On Syria, the Council gave its strong backing to the work of the UN Special Envoy for the resumption of the intra-Syrian talks in Geneva. Armenia confirmed its intention to continue providing humanitarian assistance to the people of Syria on the ground and work closely with all stakeholders for improving life conditions of persons who moved to Armenia from Syria. The EU confirmed that it will continue to assist Syrian people inside and outside Syria. On Iran, both the EU and Armenia remained committed to the continued full and effective implementation of the Joint Comprehensive Plan of Action (JCPOA). On Turkey, the EU reiterated its support for the normalisation of Armenia-Turkey relations and stressed the need for both sides to engage in this process without preconditions. Armenia reiterated its long-standing position on establishing diplomatic relations with Turkey without preconditions.

The Council was chaired by the Foreign Minister of Armenia, Zohrab Mnatsakanyan. The European Union was represented by the High Representative of the Union for Foreign Affairs and Security Policy/Vice-President of the European Commission, Federica Mogherini.