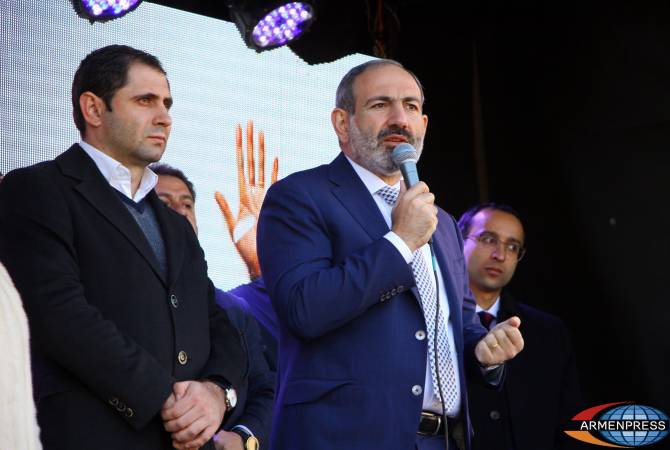 
YEREVAN, DECEMBER 3, ARMENPRESS. The Armenian government has set a task to spend additional 2.5 billion USD to cover the needs of the Armed Forces in the next 5 years, acting Prime Minister Nikol Pashinyan said at the meeting with the residents of Ararat town on the sidelines of the pre-election campaign, reports Armenpress.

“These 2.5 billion USD must be paid the corporations well known to you. If they do this voluntarily, we all will consider the fact that they have done it on voluntary basis. But it doesn’t mean that this is the whole amount of the stolen money. The most important thing for us is to be able to objectively assess how much money has been robbed and how much money must be returned. It’s not an easy work, but I hope we all will have a patience to properly do this job”, the acting PM said.

Pashinyan said there is a key point in the pre-election program of My Step alliance according to which there shouldn’t be political prisoners in Armenia ever. “In order for anyone not to be considered as a political prisoner, no illegality should take place against anyone, no one should be prosecuted on ungrounded basis. This is very important, but in order for the criminal cases to be well-grounded, they need to pass by the procedures prescribed by law. And of course, the new parliament, which is going to have the people’s trust vote, can make certain legislative changes. I have said that it is very probable that we introduce some elements of transitional justice which will envisage all these opportunities”, he said.

The acting PM noted that they must be able to develop ready resolutions on what actions need to be taken in cases, when, for instance, someone has been presented to the investigative body and announces that he has made abuses, robbed money and is ready to return it. “This is a very important issue which we need to discuss in the parliament in the future. And of course, the public should also participate in this discussion because on the one hand we see that the public puts a demand before us to be more effective in the anti-corruption fight, but on the other hand the legal procedures in most cases do not enable us to be quick enough and solve the issues with the pace desirable for the public”, Nikol Pashinyan said.

Early parliamentary elections in Armenia will take place on December 9. The election campaign launched on November 26 and will end on December 7. 11 political forces are participating in the elections.