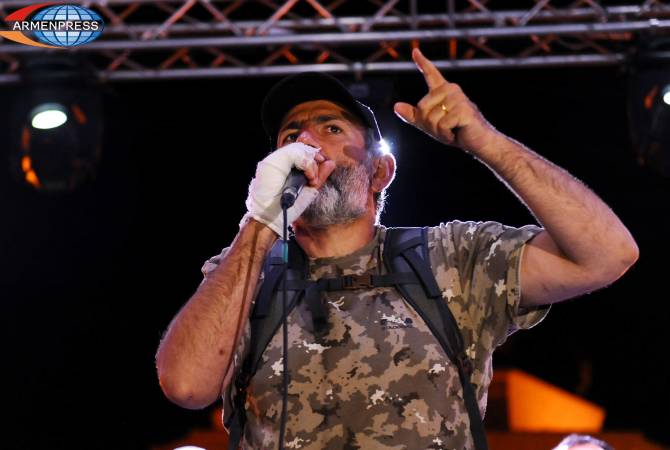 
YEREVAN, APRIL 27, ARMENPRESS. Head of “Yelk” bloc parliamentary faction Nikol Pashinyan announced about restoring massive actions of civil disobedience starting from April 29 throughout the entire territory of Armenia. ARMENPRESS reports Pashinyan introduced their future activities during the April 27 rally in Gyumri. “Today and tomorrow we have stopped all the actions of civil disobedience in the country. We did it for two reasons. First, in order the participants of our movement have the chance to rest for 2 days because they have deserved that right. Second, if the roads were closed, how would we reach Gyumri today? Today our main event takes place in Gyumri and tomorrow will take place in Vanadzor and during this period all the actions are stopped. But the actions restore from April 29 with double power and double volumes, and on May 1, at 08:00 in the morning we flood the streets and squares of Yerevan city”, ARMENPRESS reports Pashinyan as saying.

Nikol Pashinyan mentioned that all the parliamentary factions must nominate the people’s candidate of Prime Minister. He believes that any other decision will further deepen the existing crisis.

Pashinyan also referred to the opinions that his movement will launch political, economic and geopolitical wars against Russia. He underlined that they are not the enemy of Armenia to lead Armenia in a non-prudent and adventurist path. “We have never said and do not say now that Armenia must discontinue its membership to the Collective Security Treaty Organization. We think that Armenia must continue being a member of the organization since it stems from the national interests of Armenia”, Pashinyan said, adding that Armenia must remain committed to its international commitments, including the agreement signed with the EU and the agreement of the Eurasian Economic Union.

Following the rally the participants marched in the streets of Gyumri.