We can more actively assist Russia: Armenian President on role of CSTO countries in fight against Islamic State 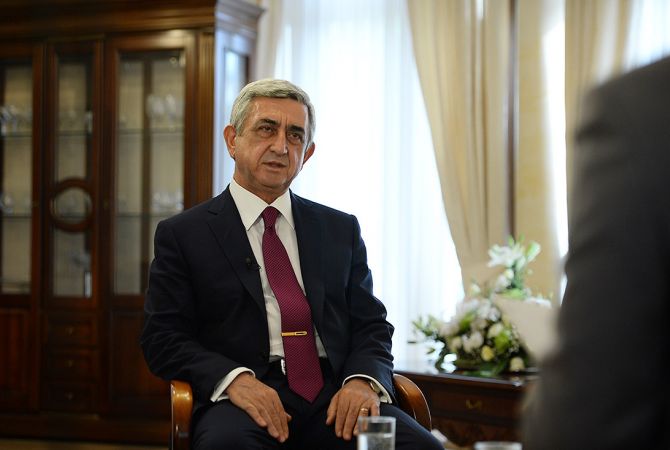 
YEREVAN, MARCH 24, ARMENPRESS. Terrorism is evil which can occur at any time, that’s why it is necessary to be always alert and take measures against it, President of Armenia Serzh Sargsyan said in an interview to MIR TV, which is published on the website of the program.

President Sargsyan responded to a question regarding the role of CSTO countries in the fight against terrorist groups.

“I think we can more actively help the Armed Forces of Russia in undertaking this big and important issue. Russia is making a very big contribution in this fight, and we must bear some part of either the responsibility or efforts”, he said.

According to the President, it is especially important for Armenia, because “a huge number of our compatriots live in the Middle East”.

“As we know, the Islamic State is treating with special cruelty against national minorities, especially against Christians. Our brothers and sisters living in Syria and Iraq suffered greatly from this. Of course, the sooner Islamic State militants are eliminated, the better it will be for entire mankind. We are ready to continue providing humanitarian aid to the Syrian people, which suffered greatly. I think, those efforts, which Russia is currently making, the Russian Armed Forces, are successful”, he said.

He said it is understandable that many measures are taken in both London and Paris for security, however terrorism is a crime which is difficult to predict. “It’s one thing when groups are wanted, when a visible enemy exists, it’s another thing when under the mask of refugees people who have a very different task can enter any country”, Sargsyan said.

He added it is very difficult to fight against it, stressing that terrorism is a very dangerous phenomena. “First of all it is necessary to extend condolences to all victims and wish success to all who are fighting against this evil”, the President said.