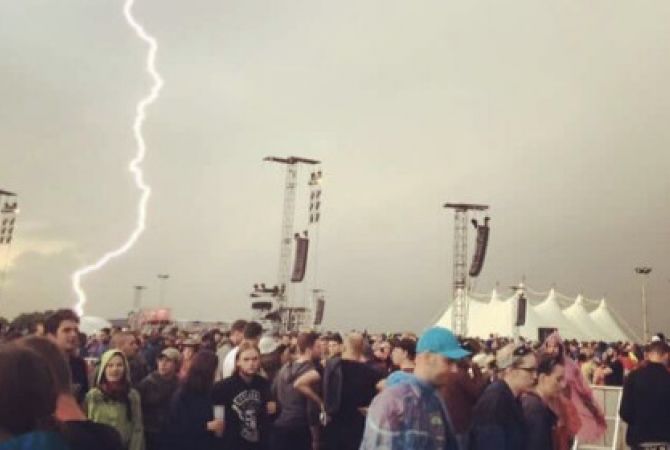 
YEREVAN, JUNE 4, ARMENPRESS.  More than 40 people have been injured after lightning struck the Rock am Ring festival in western Germany, organizers say. Several people were seriously injured, including one person who had to be resuscitated at the scene , reports BNO news.

The incident happened late on Friday evening when tens of thousands of people were attending the rock festival at the former Mendig Air Base near the border with Belgium, or about 96 kilometers (60 miles) northwest of Frankfurt.

"A severe thunderstorm with lightning strikes has caused multiple injuries at the festival grounds in Mending," organizers said in a statement on early Saturday morning. "Police, firefighters and the Red Cross responded and were able to reach those affected quickly."

The statement confirmed that at least 42 festival goers had been injured by the lightning and were transported to area hospitals, including eight people who were suffering from serious injuries. One person was successfully resuscitated at the scene, according to the German Red Cross.

Activities at the rock festival were briefly halted as a result of the incident, but it later resumed after organizers consulted with authorities. Rock am Ring in Mending is taking place from Friday through Sunday and occurs simultaneously with the Rock im Park festival in Nuremberg in southern Germany.

Parts of Europe have experienced severe thunderstorms over the past week, killing several people and injuring dozens. More than 30 people were injured last weekend when lightning struck the pitch at the end of a children's match in western Germany.

11:29, 05.19.2022
2818 views U.S. recognizes role of population of Nagorno-Karabakh in deciding its future–Ambassador Tracy’s interview to ARMENPRESS