NKR Defense Army: Seysulan remains Armenian land, as it used to be before 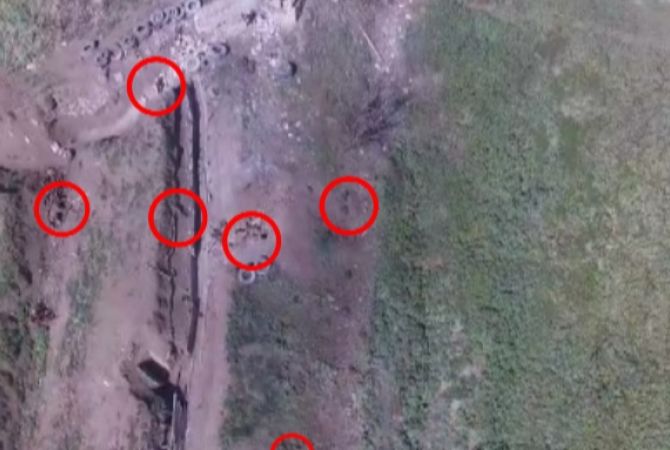 
YEREVAN, APRIL 3, ARMENPRESS.  The Defense Army of the Nagorno Karabakh Republic has issued a statement denying the information spread by Azerbaijan. “Armenpress” presents the full statement,

“According to official Baku, 21 is equal to 12. It turns out that the Defense Ministry of Azerbaijan relies on a simple trick to conceal its losses. It replaces numbers and introduces its 21 casualties resulted only in one battle for 12.

By the way, this footage shows the killed Azerbaijanis in red circles who have allegedly occupied Seysulan. While Seysulan remains Armenian land, as it used to be before…”

According to the data of the Defense Army, the Azerbaijani armed forces fired MM-21 (Grad) multiple rocket launcher on April 2, at 08: 30 in the direction of Martuni (NKR), killing 12 year old Vaghinak Grigoryan and wounding two other children. Later, 4 more civilians were taken to Stepanakert hospital.

The Defense Army conducts successful defensive battles throughout all directions of the contact line, causing significant losses to the adversary’s manpower and equipment.

According to the Defense Army’s data, Armenian forces have downed 2 enemy helicopters, destroyed 15 tanks, 3 UAVs and one “Grad” multiple rocket launcher.  Over 200 Azerbaijani servicemen have been eliminated during this period.

Since 06:00, April 3, the adversary resumed aggressive military operations using missile-artillery and armored vehicles in the southern direction of the frontline. Defense Army takes deterrence measures and has taken control of a tactical position in Talysh direction occupied by Azerbaijani forces the previous day.