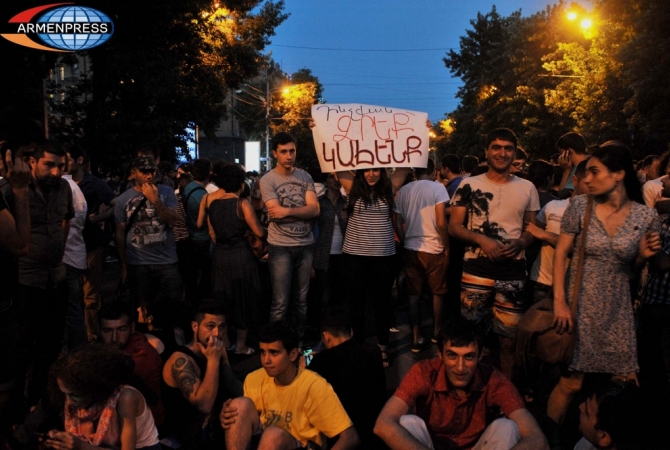 
YEREVAN, JUNE 24, ARMENPRESS. Armen Ashotyan – Minister of Education of the Republic of Armenia – joined the call to form a living wall between the police and protestors and arrived at Baghramyan Avenue. As Armenpress reports, a number of show business representatives and MP-s had earlier shared the following call in their FB pages “I am asking you to come to the Freedom Square at 00:45 am to head together to Baghramyan Avenue so as to form a living wall between the protestors and the police. The living wall has one purpose -to exclude violence.”

There are former and present MPs, intellectuals, representatives of show business, lawyers, journalists and clergymen who arrived at the protest sight at night in order to form a living wall between the protestors and police. The call to form a living wall was made by actors Hayk Marutyan, Hovhannes Azoyan, Armenian Vitamin Club humorous program members, humorist Sergey Danielyan, MP-s Alexander Arzumanyan, Tevan Poghosyan, Nikol Pashinyan, Zaruhi Postanjyan and a number of other intellectuals and politicians. The protestors manifested intolerance towards Armen Ashotyan and Samvel Farmanyan - MP of the Republican Party – by addressing them in offensive phrases. One of the protestors even threw something on Armen Ashotyan.

The new electricity tariff was approved at the session of Armenia’s Public Services Regulatory Commission of Armenia on June 17.  The electricity price has increased by 6,93 AMD, reaching 48,78 AMD per 1 kWh. Electric Networks of Armenia CJSC had suggested increasing the electricity price by 17 AMD per 1 kWh. 237 citizens protesting against electricity price hike were arrested from Baghramyan Avenue and the territory near the Freedom Square on June 23 for violating the public order. During long negotiations on June 23, the police of the Republic of Armenia suggested the protesters leaving the protest sight in order to restore the public order. It was also announced for a few times through a loudspeaker that the President of the Republic of Armenia is eager to listen to the protesters’ demands. However, the demonstrators turned down the offer to meet with the President.

As it is mentioned in the statement provided to Armenpress by the Public Relations and Information Department of the Police of the Republic of Armenia, the organizers of the march also turned down the admonishments and requests of the police. Guided by the laws of the Republic of Armenia, the police applied to the organizers of the protest with the demand to stop the illegal march but the organizers didn’t obey. The police warned that in case of disobeying the lawful requirements of the police or counteraction, the march will no longer be considered peaceful and will be stopped. The police suggested the protestors returned to Liberty Square and continued their protest action there but this suggestion yielded no result. The police used physical force and special measures towards the violators. The police dispersed the demonstration by using water cannon, and detained a number of activists and journalists protesting against the increase in the electricity price.