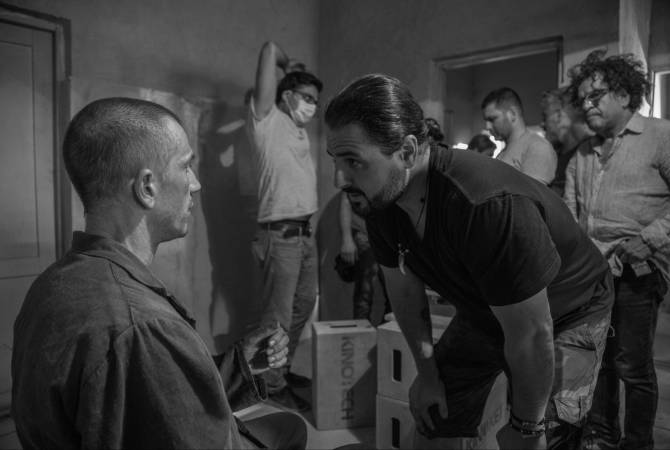 “I am very happy that the premiere of the film is taking place in Armenia. We should proudly introduce the world on the Armenian production and mention where everything had started. This is the production of my company – PEOPLE OF AR PRODUCTIONS, and I can state that the film “Amerikatsi” is a 100% Armenian production, we shot it in Armenia”, he said.

The shooting of the movie started in February 2020, but it stopped because of COVID-19. He said that many actors of the film were unable to visit Armenia that time.

Narine Grigoryan, Jean-Pierre Nshanian, Aram Karakhanyan, Davit Hakobyan, Lernik harutyunyan, Nelli Uvarova, Mikhail Trukhin and others star in the film. Arman Nshanian is not acting in the movie this time. “I didn’t see myself personally in a film telling about the Soviet years, I would not have believed in myself. On the sidelines of the movie, we started working with Patrick Malkassian and Vardan Barsumian, they are the executive producers of the film, me and Sol Tryon are the producers. We managed to implement this thanks to these people”, he said, adding that the National Cinema Center of Armenia and the Ministry of Education, Science, Culture and Sport have also greatly contributed to the creation of the movie.

The film director and screenwriter is Michael Goorjian, an Emmy Award winning actor, writer, and filmmaker of Armenian decent, born and raised in the San Francisco Bay Area.

“We met with Michael thanks to one of my relatives who said that Michael has an interesting script. I read the script, liked it a lot, it is a universal topic, has a lot to say and is a real film. We really got a luxurious film in a sense that we managed to show also our Armenian cultural values”, Arman Nshanian said.

As a young boy, Charlie escaped the Armenian genocide by stowing away in a trunk bound for the United States. His family was not so lucky. Despite his tragic start, as an adult, Charlie has managed to maintain his child-like wonder for the world. However, like so many refugees and orphans, there’s a hole in Charlie’s big heart. The story begins in 1947, as Charlie repatriates back to Armenia only to be greeted by the harsh reality of Soviet Communism. The soul of Armenia has been suffocated beneath the iron curtain. Almost immediately Charlie is arrested and sentenced to prison for the absurd crime of wearing a tie. To further ensure that he doesn’t influence other prisoners with his “cosmopolitan” ways, Charlie is placed in solitary confinement. Just as he appears to be succumbing to the terror of his situation, Charlie discovers that the prison wall outside his cell window had been damaged during a recent earthquake.