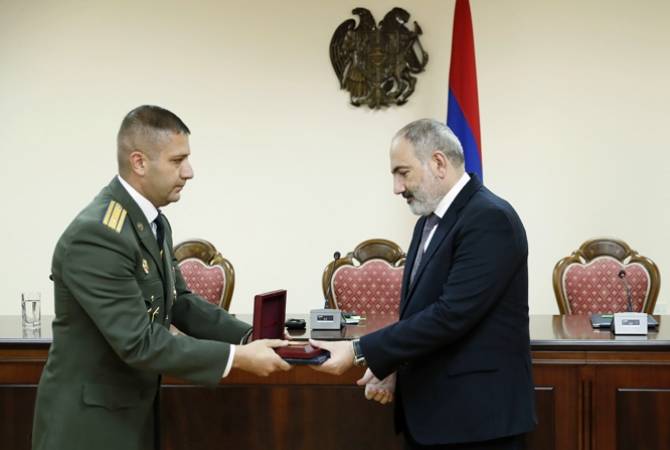 
YEREVAN, JULY 1, ARMENPRESS. Prime Minister of Armenia Nikol Pashinyan attended the ceremonial session dedicated to the establishment day of the State Protection Service of the National Security Service, ARMENPRESS was informed from the Office of the Prime Minister.

Chief of Staff of the Prime Minister Arayik Harutyunyan, Director of the National Security Service Armen Abazyan, Head of the State Protection Service Sargis Hovhannisyan and other officials were also present at the event.

"I must emphasize that we have survived and are still surviving a rather difficult period, and during this period the State Protection Service properly fulfilled its task and performed its function. This deserves appreciation. However, like any public administration body, starting from ministries, departments, we should never be satisfied with the quality of our work and should try to improve it every day, especially since work is a phenomenon that always has room for improvement”, the Prime Minister said.

“I am talking about increasing the quality of the personnel’s work and technical equipment. In this direction, of course, we must be consistent and solve the the tasks set before us.

Once again I want to thank all of you for the work done, the service and wish all of us success in solving the tasks set before us, because indeed our Motherland is going through very difficult times, and the overcoming of these difficult times must be carried out at a proper level, so that as a result of all this we have a safe, developing, developed country, where every citizen of the Republic of Armenia will feel confident and will look to the future with more confident eyes and feelings”, the Prime Minister said.

NSS director Armen Abazyan also presented awards to the head of the State Protection Service Sargis Hovhannisyan and a group of representatives of the Service.