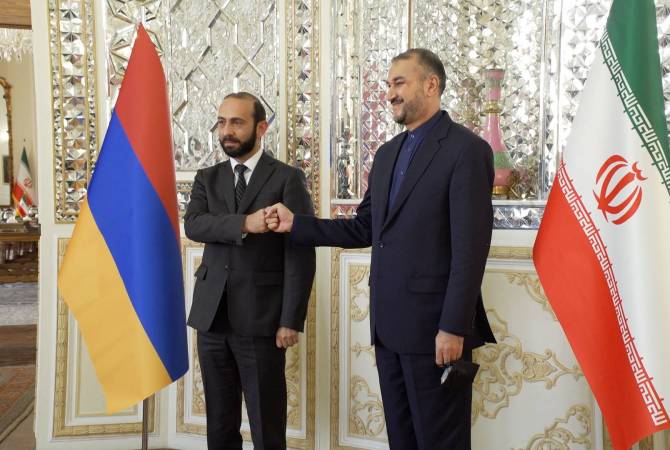 As ARMENPRESS was informed from the press service of the MFA Armenia, during the meeting, a wide range of issues related to cooperation between the two countries in bilateral and multilateral dimensions, as well as regional developments were discussed in detail.

The Ministers expressed satisfaction with the high level of centuries-old Armenian-Iranian friendly relations, expressing mutual readiness to make efforts to expand and deepen cooperation based on mutual trust.

The interlocutors referred to the prospects of activating economic ties, emphasizing the importance of taking targeted steps to increase trade turnover, including through the implementation of specific programs agreed between the parties. The activation of cooperation in tourism and culture was also discussed. In this context, the Ministers highlighted the activities of the Joint Intergovernmental Commission of the Republic of Armenia and the Islamic Republic of Iran.

The signing of a multilateral agreement on the establishment of an international transport corridor between the Persian Gulf and the Black Sea and its effective application was highlighted.

During the meeting, the sides referred to the cooperation in the field of energy and transport infrastructure. Ararat Mirzoyan informed about the process and results of the construction of the alternative Goris-Kapan road, as well as the construction of the "North-South" highway. The parties also exchanged views on the prospects of the project “gas for electricity”.

The regional developments, issues of regional security and stability were the key topics of the discussion between Ararat Mirzoyan and Hossein Amir-Abdollahian.

The Armenian FM presented to his counterpart the situation in the Nagorno Karabakh conflict zone resulted by the Azerbaijani-Turkish aggression and the humanitarian problems. Ararat Mirzoyan particularly emphasized the need for the unconditional and swift repatriation of Armenian prisoners of war, civilian hostages being held in Azerbaijan.

Touching upon the situation created as a result of the penetration of Azerbaijani troops into the sovereign territory of Armenia and the continuous provocative actions of Azerbaijan, Ararat Mirzoyan highly appreciated Iran's position on the territorial integrity of Armenia.

The Foreign Ministers of the two countries stressed the inadmissibility of actions endangering regional stability and highlighted strengthening the cooperation to address new regional challenges.

At the end of the meeting the Foreign Ministers of Armenia and Iran issued joint statement for the media.