Uruguay to open embassy in Armenia 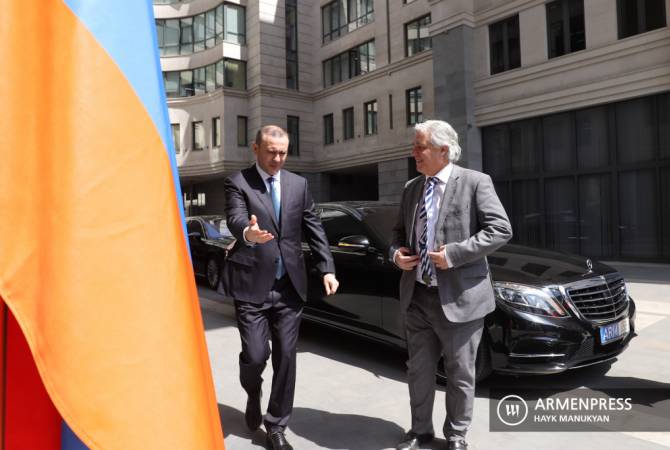 
YEREVAN, AUGUST 16, ARMENPRESS. Armenia and Uruguay have very warm, friendly relations which were born in unfavorable conditions but were strengthened with hope, Uruguay’s Minister of Foreign Affairs Francisco Bustillo said at a joint press conference with his Armenian counterpart, acting FM Armen Grigoryan. He announced that Uruguay has decided to open an embassy in Yerevan.

“First of all I’d like to convey warmest greetings from President of Uruguay Luis Lacalle Pou. Uruguay has the advantage of having been able to host all talented and diligent people who arrived from various parts of the world. Armenians and the Armenian community were able to get very well integrated in Uruguay and achieve accomplishments in areas such as politics, education, sport, journalism and business,” FM Bustillo said.

The Uruguayan FM said that during the meeting with Grigoryan they reiterated the importance of deepening bilateral relations and bringing the activities of parliamentary friendship groups to a higher level.

“We’ve also attached importance to all values and principles shared by the two countries, such as democracy, rule of law, human rights protection, peaceful resolution of conflicts and protection of environment,” FM Bustillo added.

Francisco Bustillo said that Uruguay has expressed its concern over the Nagorno Karabakh conflict to the international community, and that conflicts must be resolved without violence.

Bustillo and Grigoryan also discussed several topics contributing to deepening of relations. “From this perspective Uruguay will continue its confident steps in order to have clear and strong bilateral ties, which will be beneficial for both sides and will help the sides to achieve their goals by protecting bilateral interests,” Bustillo said.

By valuing the relations of the past 30 years, Uruguay decided to open an embassy in Armenia, the foreign minister said.

“Undoubtedly, our paths will go on together, with hope that we will have a vision for a common future.”