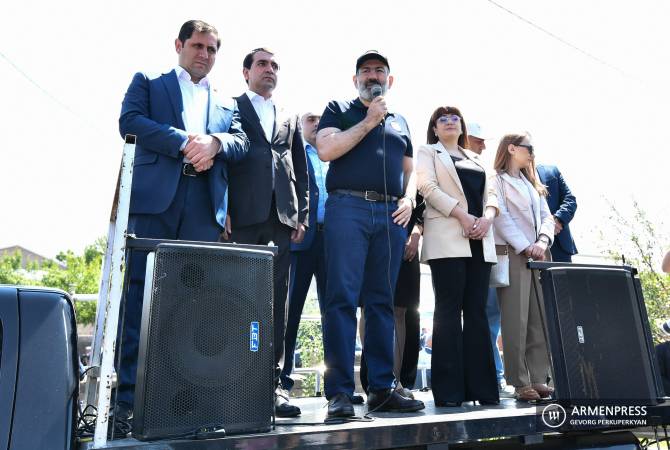 
YEREVAN, JUNE 9, ARMENPRESS. Caretaker Prime Minister of Armenia Nikol Pashinyan, who is leading the Civil Contract party’s electoral list for the June 20 snap parliamentary elections, calls the return of Armenian serviceman, who has appeared in the Azerbaijani controlled territory due to fog on June 8, a very positive step.

During the party’s pre-election campaign in Shirak province, Pashinyan has reiterated his yesterday’s proposal to exchange his son with the Armenian POWs held in Azerbaijan.

“You are aware that yesterday one of our soldiers was disoriented and found himself in the Azerbaijani side. The soldier has been returned at night, and I consider this a very positive step especially in terms of mitigation of tension on the Armenian-Azerbaijani border and the region in general”, he said.

Commenting on his proposal to hand over his son to Azerbaijan for the return of all Armenian captives, Pashinyan stated that he has tasked the respective authorities to officially convey his proposal to the Azerbaijani side.

“I want you to understand correctly, don’t ever think that this is the only one direction and tool for solving the issue of our captives. I want you to know that very intensive works are being carried out in several directions at this period”, he said.

The electoral campaign for the snap parliamentary elections launched in Armenia on June 7.

The snap parliamentary elections will take place on June 20, but the electronic voting will kick off on June 11 until June 13.

26 political forces – 22 parties and 4 blocs, have been registered for participation in the elections, but on June 8 one of the parties has announced that they will not take part in the elections.