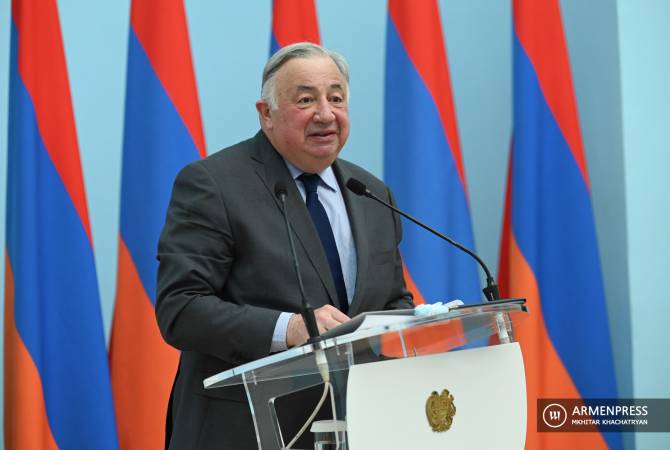 
YEREVAN, APRIL 24, ARMENPRESS. President of the French Senate Gerard Larcher gave a speech at the residence of the Armenian President, noting that they want to pass the way to Nagorno Karabakh recognition through political negotiations that will lead to lasting peace.

''From here we send a message to the Minsk Group Co-chairs. We think that Russia, the USA and France must be able to offer a way to lasting peace over Nagorno Karabakh issue'', ARMENPRESS reports Larcher as saying.

Speaking about the resolution adopted by the French legislative on the necessity to recognize the independence of Artsakh, Gerard Larcher said that it's a tool over which negotiations are taking place.

''The French Constitution provides that the Executive branch is responsible for foreign policy and it's them who are to make that decision. Of course, the Senate and the National Assembly will not stand aside. We think that as a Minsk Group Co-chair country, France, together with Russia and the USA, bears responsibility. We want the parliaments of other countries share the resolution that was adopted by the Senate and later by the National Assembly. This is the way’’, the President of the French Senate said.