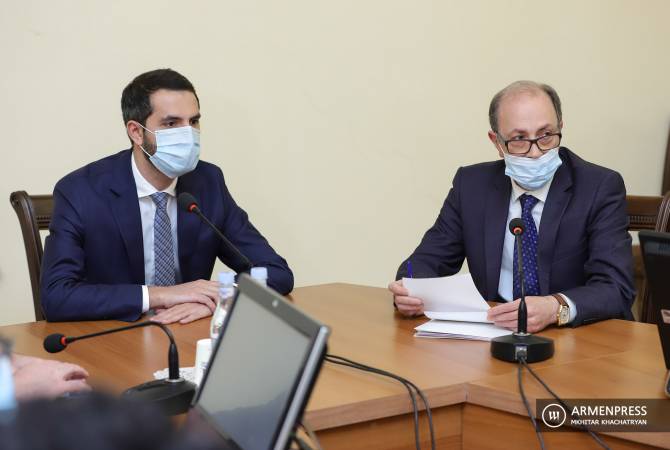 
YEREVAN, JANUARY 14, ARMENPRESS. Foreign Minister of Armenia Ara Ayvazian emphasizes the fact that the situation created in the region is the result of use of force, adding that no conflict has ever been solved by use of force, ARMENPRESS reports Ayvazian said during a meeting with the members of the National Assembly Standing Committee on Foreign Relations.

ARMENPRESS reports the speech of the Foreign Minister of Armenia.

I greatly highlight the regular meetings with the National Assembly Standing Committee on Foreign Relations, particularly for exchanging opinions over the situation created after November 9, as well as analyzing and discussing the challenges and opportunities facing us under those new conditions.

'Dear colleagues, Armenia agreed to sign the trilateral declaration of November 9 aimed at stopping the Azerbaijani-Turkish aggression against Artsakh that lasted 44 days, as a result of which a ceasefire was established and peacekeeping forces of the Russian Federation entered Artsakh.

The last serious ceasefire violation took place yesterday, as a result of which a serviceman of the Defense Army of Artsakh was injured. The Defense and Foreign Ministries of Artsakh have issued statement over this incident, where they strongly condemned the provocative actions of Azerbaijan. We fully share the assessments in those statements and as a signatory of the trilateral declaration, we are seriously worried by the continuous violations of the provisions of that declaration by the Azerbaijani side.

Those violation first of all refer to the 1st and 8th points of the declaration, according to which, the sides should stay in their positions, fully abide by the ceasefire and return PoWs and hostages.

In some cases those violations have been interlinked, such as the attack of the Azerbaijani armed forces against Khtsaberd and Hin Tagher villages of Hadrut region, as a result of which 64 servicemen were taken hostage.

Pressing false charges against Armenian servicemen and initiating criminal cases not only violates the trilateral declaration, but also the Geneva Conventions.

Those actions do not contribute to the confidence-building efforts in the region, since the most important guarantee for confidence building is the fulfillment of the assumed obligations, and not hostage-taking and the continuation of the policy of anti-Armenianism.

Armenia pursues the goal of return of prisoners of war at the highest level, which was announced by the Prime Minister of Armenia during the January 11 trilateral meeting.

Armenia will continue its efforts to return all prisoners of war and hostages, as well as to clarify the fate of the missing persons. For this goal the Foreign Ministry cooperates with its international partners, combining its measures with other bodies in charge. By joining the January 11 trilateral statement, Armenia clearly showed that its ready to take measures for a mutually beneficial use of economic and infrastructural potential of our region. But for recoding success we need mutual trust.

Only a negotiated political settlement that will respect the rights of all parties, will pave the way to the elimination of the causes and consequences of the war, bringing a lasting peace and reconciliation to the South Caucasus region.

Armenia is ready to continue Nagorno-Karabakh peace process under the auspices of the OSCE Minsk Group Co-Chairs, based on the portion of the basic principles and elements, which were missing in the November 9 statement.

The de-occupation of the territories of Artsakh and the creation of adequate conditions for the return of Artsakh's Armenians who have been displaced from those regions are also among the priorities of the Armenian sides.

Addressing the humanitarian situation in Artsakh is one of our current priorities, with the direct involvement of our international partners, in particular the UN.

In this phase, the partnership between Armenia and Artsakh is of key importance. Recently I visited Artsakh and held a discussion with the leadership of Artsakh over our joint pan-Armenian agenda. I think that we should also coordinate more closely our efforts with Artsakh at the parliamentary level, particularly, for to making the voice of the Armenian people more audible in various international parliamentary platforms.

Summing up, I want to once again thank for initiating these discussions. I will be glad to listen to your remarks and approaches, as well as will answer your questions.