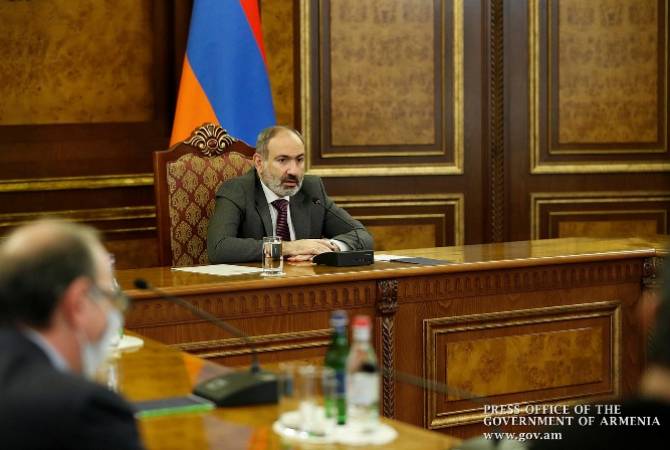 Prime Minister Pashinyan addressed the meeting with opening remarks, in which he stated:


We have had some tensions in Artsakh - on the Armenian-Azerbaijani border - since yesterday. I want to inform you about the situation and the decisions taken so far. Yesterday our positions were attacked by Azerbaijani army units in the Hin Tagher-Khtsaberd section of Artsakh. Turkish Special Forces were reportedly involved in the offensive.

The attack came in a situation where the Russian peacekeepers had not yet been deplored to that section. Our Armed Forces and the Artsakh Defense Army fought and retaliated. We have at least 6 wounded servicemen; there are other injured: the details are being verified.

Some time after the skirmish had started, a small Russian peacekeeping unit approached the combat zone and the fighting stopped, but a section encompassing the villages of Hin Tagher and Khtsaberd came under the control of Azerbaijan’s Special Forces. The Russian peacekeepers entered the zone with greater force this morning; the situation is relatively stable at the moment, at least the presence of peacekeepers there gives us some confidence that there is a high probability of avoiding further escalation.

Our task is to bring the situation into conformity with the November 9 statement’s provisions, which clearly state that from the moment the statement is adopted, the troops shall remain in their positions along the line of contact. The point is that the Khtsaberd- Hin Tagher section is located within the administrative boundaries of the former Nagorno-Karabakh Autonomous Region, and therefore, it should be controlled by the Armenian forces just as it used to be before the adoption of the November 9 statement.

Regardless of the presence of Russian peacekeepers, yesterday’s offensive launched by Azerbaijan is obviously at odds with what is stated in the provisions of the joint statement of November 9: the Ministry of Foreign Affairs of the Republic of Armenia clearly stated this in its statement issued earlier today.

It still remains to be seen why the peacekeepers were not stationed there at the time of the attack? What matters most at this point is that the peacekeepers have already entered the area with considerable forces, which should rule out the advance of the Azerbaijani forces. Of course, there are also Defense Army units deployed to that section, but the presence of peacekeepers gives us confidence that we will be able to maintain some stability there.

The next issue we need to decide on in the near future is the situation in the Kubatlu-Zangelan section. While there is no mention of these areas in the joint statement, because at the time of signing the statement, unfortunately, those areas were mostly controlled by Azerbaijani forces, except for only some small sections. During the negotiations there was an understanding that the borders over there had to be clarified yet. This is where some tension may occur or arise in the future. The point is that we have a road of strategic importance for us passing through that section; there are specific issues related to the borders and coordinates. Yesterday discussions were held in Moscow until after midnight with the participation of the Armenian Minister of Defense. There are several options and we will have to decide on one of them in the near future.

The exchange of war prisoners is very important. Here, too, we have some progress or an opportunity for progress. We have to make concrete decisions today or tomorrow.

I would also like to inform the Security Council and our parliamentary colleagues about the identification of missing persons and the evacuation of dead bodies. I am going to tell you where we have arrived, what processes should take place in the near future, what we have to do to tackle these problems as soon as possible, and why we are confident that we will be able to address them as quickly and effectively as possible.

This is the range of issues to be discussed today. Since yesterday, and not only yesterday, for a long time now, there have been large amounts of misinformation against the background of natural tensions; this is a real threat to national security and we must understand how we manage the situation. We have invited several opposition representatives, so that we could formulate the steps to take ahead.

I would like to emphasize that this information terror has troubled our opposition figures as well, and I must say that I have been receiving calls and alarms from the opposition since early this morning. Concrete steps must be taken in this regard, which means that at least as an agenda we can frame this as a common task.

As the saying goes, every cloud has a silver lining, at least the aforementioned information terror, which has been escalating since yesterday evening, can become the fulcrum where the opposition and the government can form common tasks and make decisions that will not be perceived as the opposition’s decision against the government or vice versa. This is an issue on which we need to exchange ideas in order to see what we can do there.

In general, I want to say that the situation I spoke about is manageable; there is no need to panic, we just have to make decisions, and of course, we will make those decisions. We are prepared to answer all the questions, should there be any. The problem is that we have to present to the public correctly what a decision is made for, and why we are facing a specific situation.

As far as the Hin Tagher-Khtsaberd section is concerned, I would like to note that initially there were some contradictions in the assessment of the situation in terms of who was there as of November 9. As much trivial as it can seem, but this is an important detail, because it has to do with the situation at hand, since there are different interpretations; accusations are being traded as to who and where was as of November 9.

We, the Defense Army, are confident in the veracity of our position, and, of course, we will work consistently to reach out the truth to our international partners and manage the situation with the help of our arguments.”