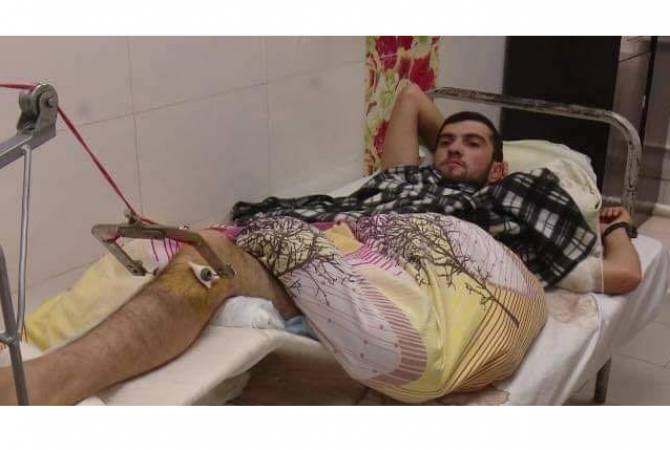 
YEREVAN, OCTOBER 16, ARMENPRESS. All Azerbaijani soldiers who have been detained as prisoners of war by Artsakh’s military are being provided with necessary medical treatment, Artsakh’s Human Rights Defender Artak Beglaryan told ARMENPRESS.

He said that recently one of the Azeri POWs underwent surgery by Artsakh doctors for his wounds. “In accordance to humanitarian rules, international law and our national legislation he is provided with humanitarian treatment. Surgery was conducted based on his needs, and not only him but all other POWs are receiving and have received appropriate medical treatment,” Beglaryan said.

Beglaryan said he personally inquired on the condition of the POW.

Sources from Artsakh familiar with the matter told ARMENPRESS that the abovementioned Azeri POW is Yulsiyv Nuradin Bakhtilaroghlu (pictured above), and he is hospitalized in Artsakh for already 10 days.

Amid weeks of relentless and indiscriminate Azeri attacks on villages and towns in Artsakh, the Azeri forces, which include mercenaries from terrorist organizations from the Middle East, even shelled a civilian hospital on October 14, not even realizing that perhaps their own servicemen who have been captured are being treated there.

“Terrorists cannot even imagine that those hospitals treat even their military servicemen captured by Artsakh military forces,” the Armenian health minister Arsen Torosyan said over the deplorable attack.

Then, on October 15, a video was posted online showing how Azerbaijani troops are executing Artsakhi POWs and filming the shooting.