92% of the Armenian public considers relations with the EU as very good, FM says at EaP ministerial 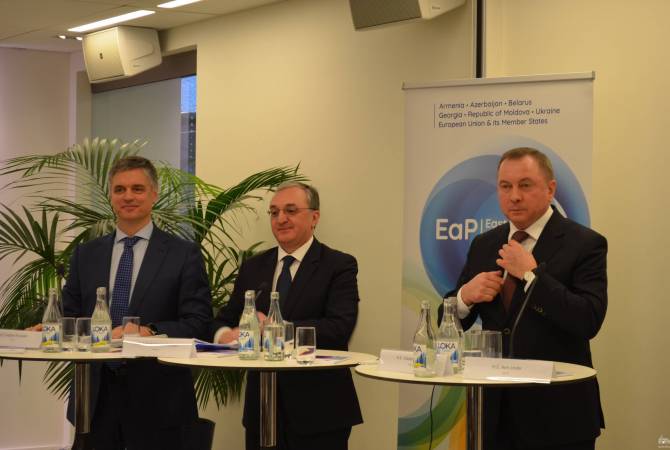 
YEREVAN, NOVEMBER 6, ARMENPRESS. One of the greatest things of Armenia’s relations with the European Union is the sense of wisdom that prevailed and led to the Comprehensive and Enhanced Partnership Agreement, Minister of Foreign Affairs Zohrab Mnatsakanyan said in remarks at Eastern Partnership 10th anniversary Ministerial meeting on “A new political vision for EaP”.

The minister delivered a speech and answered to questions at the event.

Below is the transcript of remarks as provided by the foreign ministry:

“Thank you very much. I look at the strategic significance of the Eastern Partnership, the past 10 years, the way in which the idea was incepted is something to debate and to work out, and with the Polish and Swedish friends - to consult. But looking back at 10 years and looking at it now and for the next 10 years, I think strategic significance of it just thrives me. Remember 30 years ago, exactly 30 years ago, the fall of the Berlin wall, the triumph of freedom, the prevalence of that ideology, democracy, human rights - these all matter now. The strategic map of the world was very different compared to what we have today.

But shared values have a lot of pressures and not just in Eastern Partnership. Democracy, human rights, our accountability before people, and they are very good for resolving conflicts, unlike the authoritarian regimes. Then, we have to pay attention to it as well: shared values, what is happening in the European Union. We have to be very open about this.

The concept of  illiberal democracy is something to reflect on. You all know about Brexit: it’s not the end of the European Union. But it’s about the diversity of Europe. So, this is what makes us a part of a bigger story. We all have individual agendas. Bilaterally, I think one of the greatest things of our relations with the European Union is the sense of wisdom that prevailed and brought us to the Comprehensive and Enhanced Partnership Agreement. It’s different from Association Agreements, but it is basically everything Association minus DCFTA. So, yes we have different bilateral agendas, but the sense of belonging, the bigger picture of Europe is what Eastern Partnership makes up. And I am squaring it in the broader picture of the challenges, security challenges that we are facing in the world today, not individually only, we all have different security challenges, not merely collectively, but globally, in the context of Europe, I think, this is where we have to keep on calculating what is Eastern Partnership in the broader context of Europe. We have very important instruments and tools, and you have been discussing that. These are very important things: from digitalization to TENT to all the other things that we have, rule of law, democracy, to small and medium size enterprises - these are the instruments. But I’m looking at the strategic significance of the Eastern Partnership, and that’s where I see the value of it for the next 10 years. Thank you.

Question: You personally led negotiations of Armenia, regarding an Association Agreement, which Armenia then later opted out from and instead signed the CEPA agreement. But to your mind, looking ahead 5, 10 years, where would you like to see your country’s relations with the EU, in such a time frame?

Zohrab Mnatsakanyan: Thank you very much. Before going to that question, I would want to say - good job done so far as Armenia is concerned. I think this summer survey has shown 92% of the Armenian public considering relations with the EU as very good. That’s a good job done on communication. I absolutely agree with the points made on exactly what I have in mind when I talk about the strategic significance effective multilateralism, we, especially the small nations, we depend on that, this is an absolutely important platform for effective multilateralism, especially amongst countries who share values.

Five to ten years on, that’s exactly where we have been benefiting from, how we will continue to benefit from the relations with the European Union, relations with Europe, relations within Europe. I think the important challenge is to spread the sense of the Eastern flank of Europe further towards other parts of Europe. Poland and Sweden have been very important as the engine of developing the concept of the Eastern Partnership. But spreading that sense of mutual dependence, significance of the Eastern Partnership to every part of Europe, I think, that’s a very important challenge. Developing the shared, value-based relationship, our CEPA, basically, gives us that absolute opportunity to raise the level of our development according to the model we are striving at. Like the sectoral cooperation within CEPA gives us that opportunity, so let’s get the best of it. We have shown the powers of political will so far as anti-corruption is concerned, democratic institutions and so on, so forth. We know that’s not enough, we have to institutionally further strengthen and enhance them. And that’s what we are doing, and that’s where the Euroepan Union has been and remains an important partner to us and those are just examples of how we are evolving.

We have this evolution of relations, it carries on. We square into the bigger picture of those security challenges we are dealing with, and our security challenges are pretty complex, not exactly the subject to discuss now. But within that the European Union has been an important security provider in terms of both the institutional strength, institutional capacities, the values, that mattered for 28 years, it’s going to matter further on. This is the playground, we believe in, we work with, and this is very important. This is how it’s going to continue. Thank you.

Question: Minister Mnatsakanyan, what can Armenia offer in terms of cooperation?

Zohrab Mnatsakanyan: Well, Armenia is very comfortable in its playground, the Armenian people have been contributing to the collective sense of the shared security, the shared development. This is what is important for all. Let alone wine, brandy, good creative education, good smart development, but those are specific, practical things. What do we offer out of cooperation? Exactly what cooperation is for. That is the sense of a common house. And I do agree that in fact we have an excellent process on structured conversation, concerning the next 10 years. This has to be kept up. There are many good and interesting ideas, which make more tangible. Within this format it is a general talk, but I think within that structured conversation we have a plethora of interesting ideas about the way in which we find ways contributing mutually to what is good to all of us, the sense of common home. That is the biggest thing.