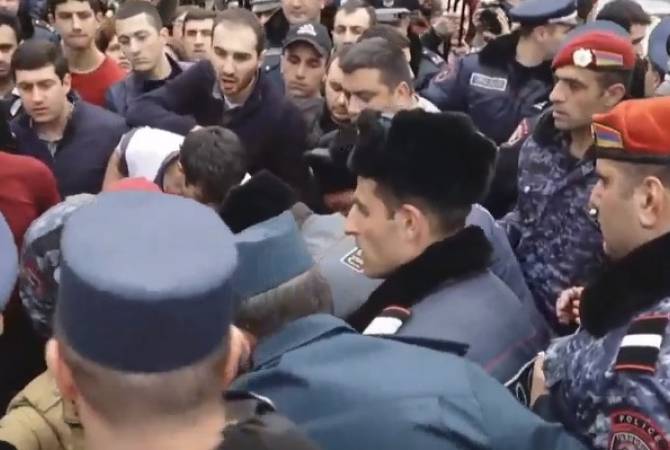 
YEREVAN, MARCH 14, ARMENPRESS. Four demonstrators have been detained in downtown Yerevan amid the ongoing protests against the City Hall’s dismantling of several cafes near the Opera building, Yerevan Police told ARMENPRESS.

They have been taken to the downtown police station, YPD spokesperson Edgar Janoyan said.

Protestors demonstrating against the Yerevan City Hall’s ongoing dismantling of cafes near the Opera House have blocked the Mashtots Avenue – Tumanyan Street intersection in downtown.

Protesters include both owners and employees of the cafes.

A group of demonstrators were seen blocking the major intersection by laying or sitting in the middle of it. Yerevan police are trying to negotiate and open the street.

The demonstrators are demanding the City Hall to cancel its decision, saying they will become unemployed.

The City Hall had initially notified the cafes earlier in December of 2018 that the city is halting its lease contracts.

Shortly afterwards, Yerevan Mayor Hayk Marutyan said that removing the outdoor venues in the area will bring back the cultural atmosphere.

Addressing citizens of Yerevan, the Mayor said that today their dream of many years is being realized – the surroundings of Opera are being “liberated.”

“This is the beginning of the process, this will be continuous. I thank all Yerevantsis for supporting us in this matter, we feel your support. Let’s return Yerevan its cultural image,” Marutyan said on Facebook.