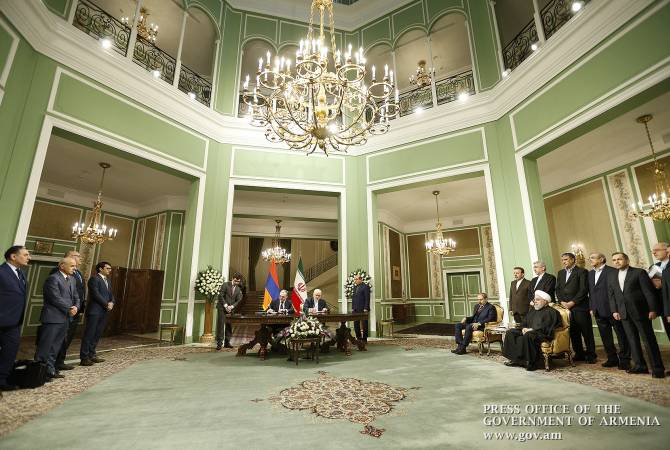 
TEHRAN, FEBRUARY 27, ARMENPRESS. Armenia and Iran are enriching the legal-contractual base: two Memoranda of Understanding have been signed today in Tehran at the presence of Armenian Prime Minister Nikol Pashinyan and President of Iran Hassan Rouhani, reports Armenpress.

The MoUs have been signed between Armenia’s ministry of economic development and investments and the Institute of Standards and Industrial Research of Iran, as well as between the same Armenian ministry and the Supreme Council of Free Trade, Industrial and Special Economic Zones of Iran.

Pashinyan already met with Iran’s President Hassan Rouhani. An official dinner will be given on behalf of the Iranian President in honor of Armenia’s PM. Thereafter, Nikol Pashinyan will meet with Speaker of the Parliament of Iran Ali Larijani.

In the evening of February 27 the Armenian PM will visit the Ararat sports and cultural center of Tehran and will meet with the Armenian community representatives.

On February 28 Pashinyan will visit the Iranian city of Isfahan to meet with the governor and the Armenian community representatives.