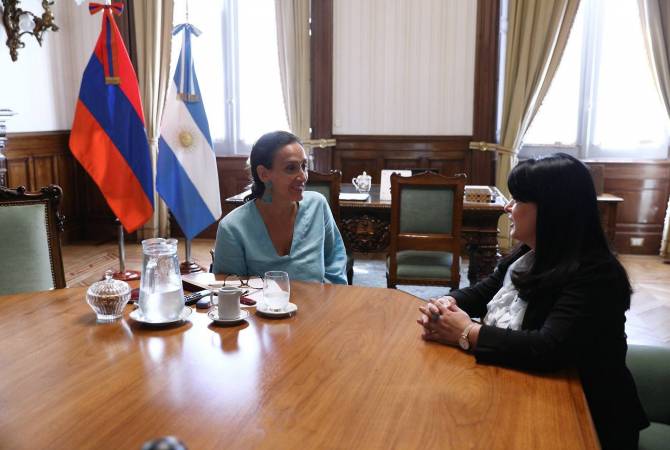 
YEREVAN, FEBRUARY 19, ARMENPRESS. Ambassador of Armenia to Argentina Estera Mkrtumyan met with President of the Senate and Vice-President of Argentina Gabriela Michetti on February 18.

As ARME NPRESS was informed from the press service of the MFA Armenia, the Armenian Ambassador presented the processes following the early parliamentary elections of Armenia in December, 2018.

During the conversation the Ambassador also referred to the political issues on the agenda of the two countries, prospects for the development of economic relations, as well as the activation of bilateral interactions both on bilateral and multilateral formats.

The Vice President of Argentina highly assessed the level of relations between the peoples of Armenia and Argentina, as well as inter-state relations and informed about her intention to pay an official visit during the current year. Given the fact that this year Armenia presides over the EAEU and Argentina over the MERCOSUR, the sides decided to derive benefit from those platforms and maximally foster the cooperation between the mentioned organizations.

The Armenian Ambassador drew the attention of Gabriela Michetti on the fact that Armenia is the only country in the region where Argentina is represented at a high level. The important enterprises operating in Armenia due to the investments of Argentine-Armenian businessmen Eduardo Eurnekian, as well as the school renamed into “Republic of Argentina” since 1993 are the best proofs of the above-mentioned.

Gabriela Michetti highly assessed the role of the Argentine-Armenian community in the social and economic life of the country. The Vice President of Argentina also expressed her admiration for the Armenian nation's diligence, its commitment to Christian values, as well as numerous struggles for the preservation of its identity throughout its millennium-old history.

At the end of the meeting the Armenian Ambassador also presented to Gabriela Michetti information on regional processes.