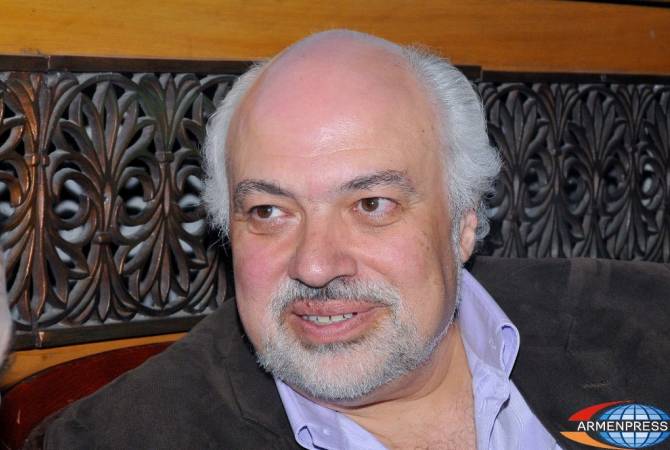 
YEREVAN, FEBRUARY 4, ARMENPRESS. Opera News describes him as a conductor who can be dreamed of by a singer. Constantine Orbelian, People’s Artist of Russia, conductor, Director and Artistic Director of the A. Spendiaryan Opera and Ballet National Academic Theatre, is again a Grammy nominee.

This year the 61st Grammy Award will take place in the US on February 10. Verdi's Rigoletto Opera recording led by Orbelyan is nominated in the Best Opera Recording category.

Before the Award, the maestro gave an interview to the #CultTalk project of ARMENPRESS, talking about the Grammy, as well as future projects.

The Rigoletto CD is released by DELOS Productions- and in distributed by Naxos Distribution Company internationally. Regarding this particular recording, Verdi's Rigoletto is of course one of the most well known and popular of Verdi's operas, and Dmitri Hvorostovsky's interpretations in the great opera houses of the world- Royal Opera House – London, Vienna State Opera, New York's Metropolitan Opera and other theatres were received with huge critical acclaim and tremendous success. When Dmitri was tragically diagnosed with brain cancer in June of 2015, there were a number of recordings that he told me he wanted to make before he could no longer sing. Rigoletto was one of them. We were extremely lucky with the cast of the recording- we invited the young superstar American soprano Nadine Sierra to sing Gilda, the wonderful and charismatic Italian tenor Francesco Demuro as the Duke, the velvet voiced and beautiful Byelorussian Mezzo soprano Oksana Volkova was our Maddalena , the remarkable Italian bass Andrea Mastroni was Sparafucile and an extraordinary supporting cast along with the excellent Kaunas City Symphony Orchestra and the Kaunas State Chorus. As a matter of fact, besides Dmitri and myself, Nadine Sierra and Francesco Demuro were also nominated for the Grammy Award as well as our producers and sound engineers ViliusKeras and Aleksandra Keriene.

It's hard to pinpoint the uniqueness of working with a genius like Hvorostovsky. Everything is unique- his work ethic, energy, drive, professionalism, intuitive musical architecture, amazing interpretive powers and of course his glorious voice were beyond compare. He was a GREAT colleague, and it was a privilege and honor to stand next to him on the stage for 20 years. I must add that there was one more recording which Dmitri was dreaming of making. He always had wanted to sing the role of Boris Godunov (the original version is written for Baritone) and we were scheduled to record Mussorgsky's masterpiece in February 2017 with an excellent cast from the Mariinsky Theatre. Unfortunately Dmitri came down with pneumonia after our concert in St. Petersburg in December of 2016. He remained in the hospital in St. Petersburg for almost two months and was not able to make that final recording. So, one of his dreams never came true.

No one will ever replace Dmitri- not on a professional level and of course not on a personal level. He was one of the most wonderful human beings I had ever encountered. We were not only colleagues, but, we were true friends. I love his family and children like my own.

I don’t expect anything

Of course it's very exciting to be nominated for such a prestigious award in the BEST OPERA RECORDING category. I'm old and wise enough not to expect anything, but, if it does turn out that we do receive the award on February 10th, it will be a fitting and true honor to Dmitri's great talent and the extraordinary cast of singers and to the legacy that he has left us.

This year I am not the only Armenian conductor nominated. My colleague Peter Ounjian (chief conductor of the Toronto Symphony Orchestra) was nominated in the Best Classical Compendium category.  I didn't carefully look through all of the categories and nominations, so, maybe there is another Armenian name on the list somewhere. Last year, the great Tigran Mansourian was nominated for his superb Requiem and I was nominated as conductor in the BEST CLASSICAL SOLO ALBUM with the Sviridov recording I was referring to before.

We are planning the Yerevan Premier of the Magic Flute on the 25th of February with the beautiful projections and production done by our very talented Italian Opera Director Paolo Micciche with costumes done by Alberto Spiazzi.

We are planning a concert version of the Verdi Opera 'Attila» on the 21st of February with the great Georgian Bass Paata Burchuladze and our soloists, orchestra and chorus. We are also planning a concert version of Rossini's Opera IlViaggio a Reims as well a production of Bellini's Norma with our friend Paolo Micciche. We are also planning the staging of Vache Sarafyan's new ballet Ancient Gods and Vartan Adjemian's The Death of Kikos to commemorate Tumanyan's anniversary as well as a new production of Tigranian's Anoush. Of course, everything depends on the financial resources available to us.

This concert which I am planning to celebrate the 100th Anniversary of the great American Composer Leonard Bernstein will take place this year. We are a bit late, but, we were very busy in 2018.. As it turns out, I understand that the first performance of West Side Story in the USSR took place at the Yerevan Opera and Ballet Theatre in 1963. I wish that there were some photos or reviews or articles on the subject. We are still looking for more information on that production. The American Embassy will be helping us in this production and also we will be looking for additional funding to make this a wonderful celebratory event.

As you know, tours are planned a long time in advance- especially  with large groups like ballets and operas. So, I am holding talks and discussions with impresarios in various parts of the world (the UK, Europe, Asia and the USA) to see what we can try to do in the future. Again, everything depends on what finances.

I was at the Opera house for the first time in June of 1970 when I was 14 years old. I had come to Armenia for the first time with my mother from California. It was a tremendously important and emotional visit for me. I met my Uncle Konstantin Orbelian for the first time and also my maternal grandmother Zinaida Voznesenskaya. My mother hadn't seen her mother since 1945 when they were separated in Germany and my grandmother and grandfather were forcibly taken back to Ukraine from the German camps. At the time when I met my Uncle, and my father hadn't seen his brother since March 1941. You can't imagine what an important and emotional trip that was. At the time, my Uncle's State Pop Orchestra of Armenia had their rehearsal space at the Philharmonic Hall, so, I was a frequent visitor at his rehearsals as well. It was a fascinating and very interesting time for me.

My amazing Uncle always told me- «Never listen to anyone, think for yourself and do what your heart tells you» I know that he is right.

No time to play the piano

Unfortunately I don’t have the time to practice 5-6 hours a day as I once did… who knows what the future will bring. I adore the piano and every chance I have I sit at the piano and play as much as I can.